A question of forgiveness

Forgive us our trespasses, as we forgive them that trespass against us. Simple enough to understand, but not always that easy to apply.
Whilst teaching the kids on Sunday morning about the unmerciful servant, Matthew 18:21-35, it occurred to me that i have an irrational process for forgiveness.
If somebody should steal from me i find it relatively easy to forgive. Let me down however and that's a different matter. God forgives all if we are truly repentant. No thinking about it, no hiding His disappointment, just to bring it up again, next time we fail.
God is the centre of my everything, and Jesus my only benchmark. I have a long long way to go to be within a few miles of that target. Why then do i harbour such disappointment? Alan Pardew. Struggle to forgive him. Hope he fails at every club he ever goes to. Crystal Palace. Want to see them lose every week. Cannot forget how they treated during our spell at Selhurst. Irrational?
When football is concerned i cant forget. Does this mean i put football before God. No way. God first, wife second, football coming in fourth behind friends and family.
I have no answers to this, but there must be something deep inside me that says 'Don't mess with my football club or else!'
Hopefully my Heavenly Father will be a lot more understanding than me! 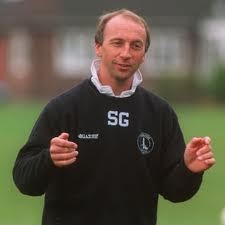 Steve Gritt, former Charlton player and manager was a guest on Charlton Live last night. Any questions for him asked the panel? I so wanted to ask if he was bitter about Curbs success, and had he secretly hoped our former manager would fall flat on his face? But i didn't. Instead i posed the question, who did he room with and what did he do to annoy them?
Wrong question! He has no irritating habits, apparantly. Or at least none he is willing to admit to on the radio. But still a top bloke with some great stories of his time in charge of Brighton. One of football's real stars in my eyes. He's got no hair but we don't care......................... 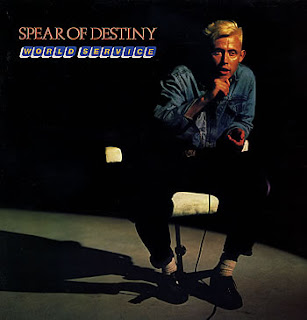 Last week i treated myself to an album on iTunes. Don't do it often but hey, i felt like pushing the boat out. Spear of Destiny - World Service. I first heard this record while i was still at school, and to be honest had forgotten about it. It saw a slight change of direction for the band moving, like many others of the time, to a slightly more pop sound.
But i love it. Every single track is a powerful song in its own right. Come Back was a single release from the album i remember, although i'm not sure if it even broke into the top 40. Mickey is a great punk/pop ballad about a young man's war following in his family's footsteps. Quite a moving song. It's played constantly at the moment and to me, still sounds as fresh as it did the first time. Money well spent.
Posted by algordon_cafc at 1:52 PM No comments:

So i've turned 40 now and decided to try and move with the times a little. I got the hang of Twitter quite quickly (as all of my church will testify), and fancied a new challenge. Will anybody read these? Don't know, and to be fair, it doesn't really matter. It's always going to be ramblings of a middle aged punk rocker (albeit toned down) with a bit of Christianity and a bit of footy thrown in. Something for everyone or nothing for anyone!
If you feel the need to give me some constructive criticism feel free. Or just kick me when I'm down. Charlton do it most weeks!
So this week I've had a new tattoo. I went into Horley town centre to see my good friend Chic, owner of the towns finest, and only, tattoo parlour. I had wanted 'saved by grace' written on my arm for such a long time and although he looked a little surprised to start with, he did oblige and also added scripture reference 'Ephesians 2:8' as well. Topped off with a cross emblazoned with the name Jesus and I'm over the moon. I'll be going back there, as a bit of filling in is required to link together the pictures. I have 20 odd years worth of artwork on my arms and want to end up with sleeves eventually.
I do kind off resent the fact everyone has gotten on the tattoo bandwagon, it really was a decent way of rebelling when i was younger. It only used to be bikers, sailors and convicts. Nowadays every Tom Dick and Harry has one. But that may be a rant for another day.
I guess you're already getting the idea that I'd be well suited to that grumpy old men TV programme!

Heidi, my very talented wife, is however not at all grumpy. Just too bloomin' clever! 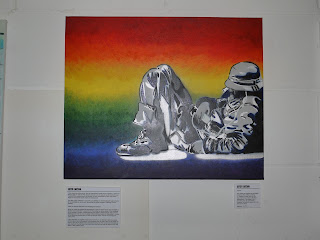 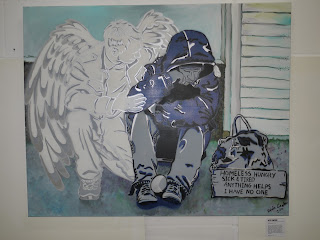 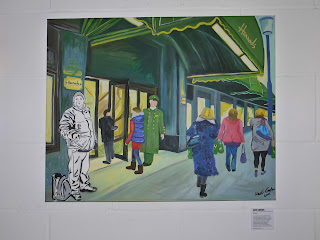 She along with the other creative members of our church have done an art exhibition at the gallery in Crawley's County Mall shopping centre, Ginger Moo. The topic for the artwork is extravagance. So Heidi bless her, went off to London 'hobo hunting', her words, looking for homeless to feed and then photograph. And what she came up with is, and obviously I'm biased, stunning. Taking her inspiration from such names as Banksy, she has produced some great stencil and acrylic work. I know all her family have been along to the gallery as well as the church. I'm hoping also it drew many others as there was a lot of great stuff in there. Many thanks must also go to a certain local newspaper, (can i name them on here if I'm going to slate them?). I emailed them to inform them of this expo, and as you can imagine, they failed to reply!


And so to my beloved Charlton Athletic. Or maybe not today. Last nights result is still hard to digest. I cant comment as i haven't even seen highlights yet but from what our Charlton community on Twitter are saying, well........................

Ok so that's attempt number one. I guess I'll soon see how exciting my life is by the frequency of these blogs. An exciting morning of children's ministry lies ahead of me tomorrow. People say you need a medal for teaching Sunday school but i love it. We're all on the same wavelength!
Posted by algordon_cafc at 9:45 PM No comments: