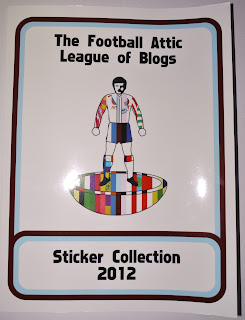 Regular readers of this blog, yes both of you, will remember my first posting on the subject of the League of Blogs, a project which was brainchild of Rich and Chris at The Football Attic.

Starting with an initial chart with space for twenty kits, popularity grew and grew as we spread the word culminating in a 'round' ninety two entries, thus mirroring the number of clubs represented in the four divisions of English league football.
Lets face it, as grown men who wouldn't fancy colouring in blank 'subbuteo' players with a hand drawn kit design putting top designers for the likes of Nike and Adidas to shame!
There are no repetitious templates in here, these are all bespoke works of art. 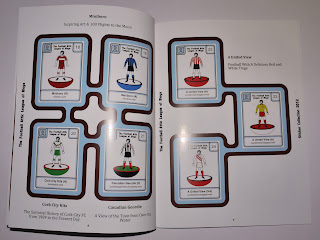 Not only had we all reminisced on our childhood football drawings, but also on all other aspects of seventies and eighties beautiful game memorabilia.
One common thread just about every child shares is their love of collecting Panini football stickers so what could be better than the boys at The Attic producing their own album for the contributors to purchase.

My Panini style book arrived yesterday, and with the trepidation of a school leaver opening their exam results, i carefully pulled the said item out of it's padded envelope.
I was expecting something rather lovely but never thought for an instant that it would be quite the item of desire that it is.

Printed on wonderful glossy paper, this 32 page book is wrapped in a good quality cover and well bound as well.
We have a nice introduction to the project and the book idea itself to kick us off, then positioned in a way Panini would be proud of are the 92 'stickers'. For cost purposes they are of course pre printed on the pages.
Alongside each design is the name of the blog that designed it and also a brief sentence summarizing their website.
On the back cover a poster style picture of all 92 with an index. 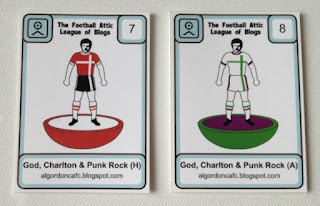 One lovely little touch was two actual glossy stickers of my own kit designs which The Football Attic had included with the book.
As i tweeted yesterday, you could offer me all the shiny's in your swaps pile, you'll never get your hands on these little beauties!

So once again guys, thanks for coming up with the idea in the first place, thanks for letting us be a part of it and most of all thank you for a wonderful keepsake i shall cherish for years to come. You won't be seeing this appearing on eBay!

If you don't want to miss any of the great nostalgic postings to be found at The Football Attic, follow them on twitter, @FootballAttic.

The wait is over. 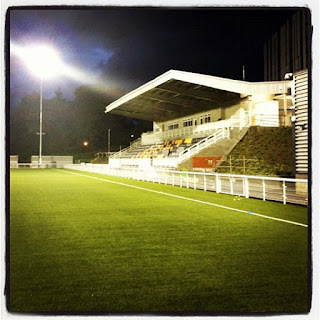 Even though we've had a superb international football tournament to enjoy this summer, i say summer..., it seems an age since our celebrations of early May. How we've all missed our passion that is domestic football.

Charlton along with a host of other clubs enjoyed their first run out since they returned to training today.
It's an opportunity for spectators to see the new kit for the first time, watch trialists they have no idea the name of, get a glimpse of and make assessments of the new signings and most of all, watch their club play under no pressure.
This isn't just a friendly warm up for the players. Supporters need to get match fit too, it's a long season ahead for all of us.

Welling United once again hosted the Addicks for this traditional curtain raiser, although at times many jokingly speculated if the game could be called off due to a waterlogged pitch.
Again, i say summer...

Chris Powell fielded a different eleven each half including a trialist keeper named Jacobo who has certainly got people tweeting.
After an even first forty five minutes, Charlton showed their dominance in the second to run out 4-0 winners.
Goals from Michael Smith, Johnnie Jackson from the spot and Danny Haynes secured the win after an own goal opened the visitors account.

Charlton won't begrudge another side taking all of today's headlines though. Maidstone United returned home after a 24 year absence. As Charlton fans (and Maidstone's visitors Brighton) will know, the day you return home to your own ground is a day that will live clear in your mind for years and years to come.

I went to the old Athletic Ground with Sutton United back in the late 80's for a GM Vauxhall Conference game. I believe it was New Years Day but i could be mistaken, it was possibly Boxing Day. Mark Golley was the talk of the terraces as the former Sutton hero was helping Maidstone to the title and a life in the football league.
At that time you could never have envisaged what would unfold over the next few years.

The ground didn't meet Football League standards so Maidstone went off to Dartford to share their Watling Street stadium.
They started well in the big time making the play offs but the following season the form dipped as did the attendances. Charlton legend Keith Peacock was at the helm during this period, the poor results on the pitch cost him his job. His successor, Graham Carr didn't last long either!

Games were played at the training ground at this level but to move up the ladder, and to play at a senior status, a new home had to be found. Sittingbourne's Bourne Park became the next stop for Kent's nomadic football team as the Stones entered the Kent League.
This is where Maidstone stayed as they progressed into the Isthmian League. During this period a piece of ground in James Whatman Way was destined for their own new home. Still financially struggling, work on the stadium was however infuriatingly non existent.

In a cost cutting exercise Maidstone would move again as cheaper rent made Ashford Town's ground seem a more appealing prospect. In the long run dwindling attendances put paid to this idea and saw a return to Sittingbourne for the 2011-12 season.
Encouraged by larger crowds and the very obvious rapid building work to the new stadium, Maidstone's performance on the pitch improved last season giving a great foundation for the side to build on as they return home for the new campaign.

Brighton went to Kent and ran out five nil winners today. This was of little consequence though, the wait is over for the Stones supporters, football is back in Maidstone!
Hopefully I'll be able to write a similar piece regarding Kettering Town in the future.

As a little postscript to this piece, and as we're on a little good news roll, it is ten years ago this week that i went down to Gander Green Lane to watch a rather special pre season friendly. Sutton United entertained a side who were playing their first ever football match, AFC Wimbledon.

Posted by algordon_cafc at 7:07 PM No comments: 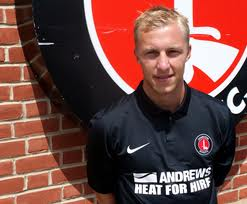 It's not easy for your average (very average) blogger to keep up to date with the comings and goings of an upwardly mobile Championship football club. Especially when they conduct their business an hour after you've posted!

On Monday i posted on the arrival of Jordan Cook to SE7. I squeezed that little article into my lunch break, but i hadn't been back in my overalls long before news emerged of the days second signing, Lawrie Wilson from Stevenage.

A former Charlton youth product, Wilson had been a central part of Stevenage's very impressive recent rise culminating in their League One play off semi finals appearance.
There was for me a little deja vu feeling as i remembered how we picked out the best of Bournemouth's crop the previous summer.
A right sided player, he is just as at home playing either in midfield or as a full back and Chris Powell has been quoted as saying that he's been brought in as competition to the current player of the year, Chris Solly.

The alice band wearing 24 year old has signed a three year contract at the club, but once again we are are left in the dark as to the transfer fee. As is normal these days the fee is undisclosed. One thing we can assertain from this is the fact that some money is obviously available for squad strengthening. We just don't know if that one deal spent it all!

Speaking of Chris Solly, he was pictured earlier modelling the new Nike away shirt which was unveiled today for the first time.
Unsurprisingly it's a black version of the home shirt, the only other difference being the slogan chosen by club sponsors, Andrews.
Heat for hire will seem quite ironic when we play up at Burnley in late November!

Saturday's trip to Welling for the traditional curtain raiser will see it's debut. No doubt a large proportion of the crowd will be giving the red version their first outing too.

I'm not a great fan of the new kits, or even of Nike in general, and black away shirts have become very commonplace over the past few years. I've seen nothing yet that will make me part with my money. The last away shirt i owned was a real gem, one that has in my eyes never been beaten. 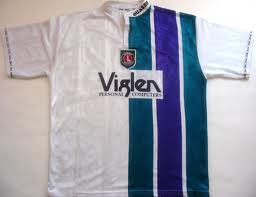 Posted by algordon_cafc at 8:03 PM No comments: 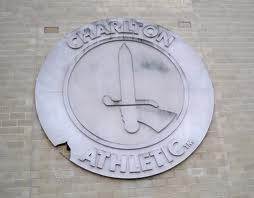 After weeks of unrest and moaning, Charlton forums have been working overtime as the natural instinct and trait of the addick came to the fore, we have finally seen some action.

Boardroom changes may have happened a little earlier than was forecast, stories of bad blood have been rife, all amidst other tales of how the funds the new owners brought to the club have run out.
The Charlton life forum could, at times, have been mistaken for a Glasgow Rangers site.

Today is a happy day though. Things are happening in SE7, and all without breaking the bank.

A young striker, Jordan Cook, has signed for the club. Having been released by Sunderland at the end of last season, the 22 year old has signed a two year deal.
He may have made only three appearances for Sunderland, yet loan spells with both Walsall and Carlisle have brought him to the attention of Chris Powell.

Cook is quite a versatile front man being more than capable performing a selection of attacking roles, at League One level anyway. He is obviously squad strengthening material at the moment albeit a great prospect for the future (don't get too carried away just yet), and coming from the north east Jordan will be great company for Michael Smith both on the training field and off it.

Other news today from the club reports that the large stone club emblem on the outside of the north stand is to come down. Erected eleven years ago it has looked shabby for a while and in some respects mirrored the club of late. As we rise though, so does the badge.
PHB construction, a firm that, apart from being club partners, are responsible for the Sparrows Lane renovation are sponsoring (i presume that means paying for) the work.
Replacing it is an aluminium version of the same size which I'm led to believe will be painted in the club colours. The new club crest will be hanging from the wall in time for new season kicking off.

Good news on a Monday morning then. I fail to see why Bob Geldof struggled with them so.

Posted by algordon_cafc at 1:51 PM No comments: