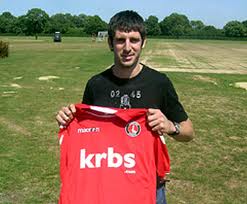 I love the excitement of summer transfer dealings. The rumours, the shortlists of who you want to bring in, the research on someone once they've signed and the anticipation of seeing an Addick for the first time.
This summer i think I'm going to get spoilt.

Yesterday we had three new faces at the club. This to me shows Chrissy Powell is very hard at work while the rest of us count the days away to our two weeks in the sun.

Danny Hollands was the big one. An ex Chelsea youngster, the capture from Bournemouth is one met with applause from the SE7 faithful. A defensive midfielder with an eye for a spectacular goal is what i read on the website. This lad has had a great season with the cherries, and our excitement at the prospect of Danny holding together our midfield is proportional to the disappointment of their supporters at their loss. This is in my eyes a great signing, but it does make you suspicious that our player of the year could be moving on, especially with this offer from Greece. I really hope I'm wrong on this one.

Bradley Pritchard is a young striker signed from Hayes and Yeading. He's come from the conference club on a one year deal and will hope to impress in the few chances he'll get. A similar situation to Ross Worner and Chris Dickson before him. I do however think the squad will be quite small this term so a couple of injuries and suspensions could see the young forward get more time on the pitch than we expect. Time loaned out to clubs short of first teamers could be par for the course for the lad but be warned, if it doesn't go according to plan he could end up well off the map. Chris Dickson is i believe now playing for Nea Salamis Famagusta in Cyprus!

Nick Pope was the third signing. A young goalkeeper from Isthmian league side Bury Town. All i know about him was that he started off at Ipswich Town. Rob Elliot is at the moment the only senior goalkeeper at the club but that is bound to change as i can't see this young lad being any higher than third in the pecking order.

Rumours are still doing the rounds of course. Chris Powell has said there's more signings to come, and when the out of contract players have gone we'll have to bring some more in to field a side!
So who's being talked about?
Yannick Bolasie is a winger at Plymouth. He seems to be the favourite. The 'green army' seem to be very upset at the prospect of him leaving, but playing League Two in August, if we don't get him someone else is bound to.
John Sullivan is free and has already expressed a desire to sign permanently. He's been in Mexico but is back soon so watch this space.
Defender Matt Taylor of Exeter and Andy Barcham a striker/winger at Gillingham are other names banded about.
One things for sure, there's more to come. A lot of Charlton fans seem to expect big name signings, that doesn't happen any more and we have to get used to the fact that we'll sign some unknown names. However, Jason Euell and Andy Reid have both been released. I wonder if................
Posted by algordon_cafc at 10:48 PM