Romance is very much alive and well.

After all the excitement of Swansea's victory over Nottingham Forest last week, you would have been forgiven for thinking that our domestic game couldn't throw up more of a spectacle.
Oh but it did, and boy what a weekend of drama it was.

The League One play offs were always going to be tough for us Charlton fans to watch. Not just because of last seasons disappointment, it also bangs home our failure this time around. As a neutral, i was gunning for Bournemouth. A lovely 'little' club who had lost their talisman manager midway through the season and were looking at back to back promotions. They served up a real treat of a game with Huddersfield. Four goals apiece after two games meant a tense shoot out which went the way of The Terriers. Brilliant football to watch and i feel more enjoyable than Saturday's Champions League final may well turn out to be.

Then of course we had yesterday's 'Survival Sunday'. The two of five to join West Ham in the Championship next season changed almost by the minute. I speak for all Addicks when i say good riddance to Birmingham. Never a good word will be said of them in SE7 after that infamous junior reds coach incident. Not to mention half time antics of a famous Brummie comedian a few years back.
I did feel for Blackpool though. I'd heard that no side had ever scored that many goals in the Premier League and gone down. They were a credit to themselves and to football as a whole. So no fairytale ending for them. Is football romance dead? Heck no! 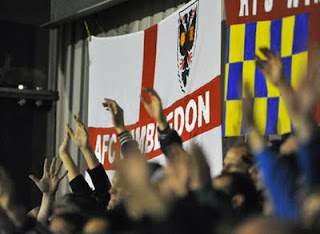 I feel i have every right to jump on the AFC Wimbledon bandwagon.
1, I was born in SW19.
2, I was at their first ever match. A pre-season friendly at Sutton United. OK, i was rooting for the home side but we'll gloss over that.
3, I used to be a regular at Wimbledon speedway before it went to Eastbourne.
4, They lived with Carl Leaburn as well.
5, Sellout Park.

I remember my old local of The Greyhound in Carshalton in 1988 when all the armchair football fans became 'loyal' Wimbledon fans for the day sporting brand new yellow and blue scarves. The whole area got excited in those days.
What went on at the end is very well documented. The re-branded franchise that is MK Dons is hated by all real supporters and the new fan inspired AFC Wimbledon was the most famous and reported side ever to play in The Combined Counties League.
That was only nine years ago. In that time they have risen through the non-league pyramid in a fashion akin to their predecessors rise through the football league. History definitely repeating itself.

I know this is a fault of mine but i always feel like i try and find some negative amongst joy. Some small little dampener that i should sometimes keep to myself. Maybe i just want everything to be perfect. I apologize for that. In this case, i wish Wembley could have been the venue instead of Eastlands. South London and Luton are far from Manchester and i think many more people would have witnessed what domestic football is all about if it had been played at the home of the English game. Today however, I'm leaving the soapbox in the cupboard. To quote Terry Brown, 'This has righted one of football's greatest wrongs.'

One last congratulation has to go to former Addick, Jamie Stuart. A very promising youngster who pretty much threw a career away with 'that' white powder incident. At 34 years of age, the defender possibly saw yesterday as his finest moment. He can't have much playing time left and i for one am glad he can finish his well documented career on a real high. No pun intended of course.
Posted by algordon_cafc at 1:59 PM