He comes from Portugal 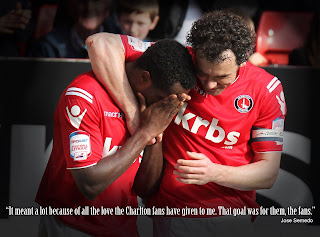 Over the past few months, part of my regular Sunday evening schedule has been to listen to CharltonLive on the world famous and rather unstable CAFC Player.
Without chancing the prospect of their heads swelling to an even larger size, the show makes pretty good listening. Post match analysis, interviews with Charlton legends (and unsung heroes), and to top it off, general silliness with listener/supporter participation. Seven till nine on a Sunday evening is now a hotly contested spot with the likes of Lewis and co. struggling to get my vote.
Last night, the crew pulled off a real humdinger of a show. It was the annual player of the year awards held in crossbars at The Valley. The show was broadcasting from the event letting us that were too tight/lazy/busy, delete as appropriate, the opportunity to hear the events unfold.
After a slightly shaky start with the sound quality we got to hear everything as it happened including Benno's eating habits! Then to top it off, a succession of interviews with members of the playing squad AND Sir Chris Powell himself. In the end the show kept going until they ran out of interviewees or they were all too drunk to make sense. Best bit of three hours radio all in all.

There had been many people, i won't call them fans, on twitter moaning about the event. They said none of the players deserved recognition, that the event should be cancelled and then mocked the results.
As far as I'm concerned, the players know just as well as us how poor the season has been. We won't concentrate on excuses, suffice to say, none of those players stepped onto the park deliberately not putting in a shift. We saw glimpses of what can be achieved and although things weren't wonderful, I'm still thankful for what we do have. I've been a Charlton supporter since the nomad days. League position isn't everything even if sometimes it does seem like it. And last night they proved what genuinely nice gents they are. These guys Saturday evenings are as depressing as ours when it's all gone horribly wrong on the pitch that afternoon.

So congratulations to Jose Semedo. I felt he deserved it, and i loved hearing him declare live on air that he hated the spanners. The evening turned into an absolute success, nobody in attendance would have said the players didn't deserve the night. Next year I'll make the time to get there, and hopefully it will be very hard to pick one player out of a promotion winning squad.
Posted by algordon_cafc at 8:45 PM