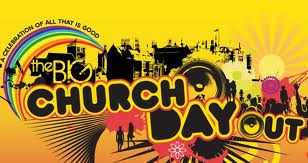 Over the years, music festivals were a big part of my summer. Glastonbury, Reading, Monsters of Rock at Castle Donnington, even Greenbelt. But that was all twenty years ago. Last year however i went to a christian music festival called The Big Church Day Out and had such a wonderful time, there was no way i was going to miss it this time around.

Normally my taste in music is not what you would label as mainstream. The Clash, Stiff Little Fingers, The Wedding Present, it's a punk/indie selection most have heard of. This type of genre is catered for by christian artists if you look for them. I love listening to the lyrics of a song as well as the music, and all the time the words aren't contradictory to the Word of God I'm happy to listen. I really don't feel the need just to listen to music praising the Lord though. There is of course a whole world out there to get amongst and be a part of. And that includes their music! Speaking of christian punk/ska bands, i would so love to see one at next years event. I know my favourite, The Insyderz have reformed and would go down a storm i think. Other christian acts worthy of mention along the same kind of lines are MXPX, The OC Supertones and Five Iron Frenzy. A lot of christian music to be honest is very bland. I like a good catchy tune, but if it's going to be slower it needs to be powerful enough to be anthem like. 'Nice' music has never been my thing!

Anyway, back to yesterday. The event at Wiston House in Steyning West Sussex is only about a forty five minute drive from home. I had to work until one but with the event kicking off around two, i thought i had plenty of time. Heidi had travelled down during the morning with her Aunt, i was to follow on the motorbike and meet the family and the church down there. One o'clock came and went, and no sign of getting out of work. As we were short staffed, i kind of guessed it would please God much more to honour my boss and stay to help rather than run out of the door leaving him in the proverbial. So i got there for half three.

First on stage and missed completely by yours truly was The David Crowder Band. A christian rock band from Texas. Heidi says they were good and the frontman, Mr Crowder himself was very hairy. What more can i say.

Newsboys were next to take the stage. The pop/rock outfit have released fourteen albums since forming in the 80's. Another band I'm not really familiar with, although they really got the crowd going and did a great version of Jesus Freak, sparking an early entrance from Toby Mac.

By this time, the crowd had warmed up and got very much 'in the mood'. Time for some real praise and worship. Chris Tomlin is an American singer/songwriter, and one of the most famous worship leaders around. Indescribable, How Great is our God, just two of the songs of a wonderful set rounded off by a real tear jerking rendition of Amazing Grace. 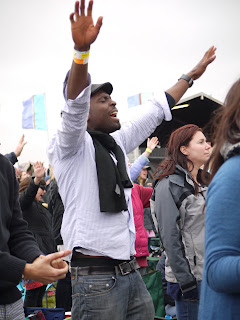 Standing in a field with 10,000 other christians singing praise is a really special time. Unlike a regular concert, the band aren't playing to the crowd and the crowd aren't singing back to the stage. It's all for God. All aimed directly at Him and something quite personal.

A stroll around the marketplace was next on my agenda. Apart from a christian bookshop stall and the regular t-shirt and jewellery sellers, the stalls comprised of mainly christian charity's trying to get their plight across to all of us about various problems both at home and abroad. Many of these guys give up their own time to improve the lives of others and i take my hat off to each and every one of them.

Back to the music and time for Toby Mac. On paper, this really isn't my kind of thing. One of the ladies in our group said he is blacker than most black people. In a good way of course! A christian Eminem perhaps. I saw Toby Mac last year and really wasn't looking forward to it, but the show he put on blew me away. The former DC Talk frontman didn't disappoint this time around either. 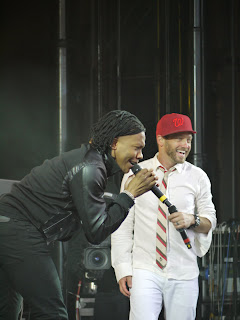 The current album 'Tonight' was of course the main theme of the set including the very catchy Funky Jesus Music and Showstopper. The classics were however still in there, No Ordinary Love being a highlight. As was his crowd surfing, albeit copying the antics of a man dressed as a sheep prior to this!
In fact, last year Toby Mac left such a lasting impression on me that at Gateway's Got Talent On Ice, or whatever it was called, the church camp entertainment, it was a Toby Mac impersonation that i did. Considering i cant sing full stop, football chants excluded, and my inability to learn words, this was a big thing for me! It is still somewhere on video i do believe, worse luck.

Israel Houghton followed. An artist who blends a bit of everything from rock, jazz, gospel and all others in between. For me however, it does all seem a little like a jamming session. Not really my cup of tea. There were of course many who did love it and he was back by popular demand for i think the third year running.

Just the finale to go. A quick trip round the food stalls first. So much to choose from, but my mind was made up early. We had, like many others, taken a picnic hamper with us full of goodies. By nine in the evening though, i needed hot food. Higgidy pies had their van parked up all day, and one of their fine steak and red wine pies went down a treat. In fact considering the windy, and slightly cold conditions, it really did set me up a treat for the final performance of the night, Matt Redman. 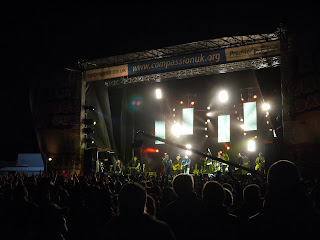 A final hour of pure worship to round off a fantastic day. The Stand, a real anthem of a song and Dancing Generation, one of the catchiest upbeat worship tunes both brought the roof down! A new song, Ten Thousand Years, was a real treasure and a treat to hear. Matt's first song, and encore as it turned out, was so well received the whole crowd were singing it in the car park on the way home. If anybody can tell me the name of it, i would be hugely grateful!

So the music was a treat for our ears and the food a treat for our bodies. That however was not the highlight of a truly special day. Listening to the girl on stage from (i think) Uganda brought a tear to the eye. Sponsored as a little girl through Compassion UK, she went on to get a masters in microbiology at university in England. It's these kind of testimony's that bring it all home. Heidi was always keen to sponsor a child and last year agreed to sponsor a young boy called Abdul in Burkina Faso. Take a minute to look at the link to their website. It really does make a difference to a child's life, not just in the present, but gives them a fighting chance to really do something in later life.

Peter Greig hosted the whole event. During Matt Redman's worship time, he asked anybody in the crowd who wanted to let Jesus into their lives to follow him in prayer. Over one hundred people gave themselves back to our Father last night, to the biggest cheer and round of applause of the day. That is what yesterday was really all about. The entertainment was great, the food delicious, entertainment for the kids and a tea tent for afternoon cream teas. All of these helped, but yesterday was about one thing. 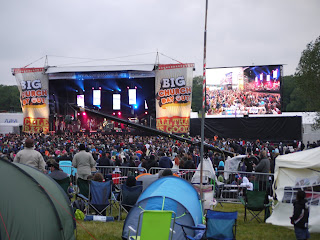 Posted by algordon_cafc at 5:07 PM