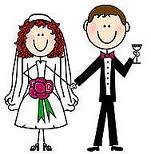 This weekend i dusted down the whistle and made the trip oop north for a wedding. I do enjoy a good wedding and the opportunity to put the best threads on and this was certainly no exception.

Tim, the groom is a childhood friend of Heidi's and yesterday it was his turn to jump the broomstick.
After leaving school he headed north for further education and never came back, much like his brothers before him. Heidi was always going to be there for the big day and although we headed up there a little worried only knowing a half dozen people between us, we left knowing a fair few more as is always the way.

We stayed at the hotel which was to host the reception, The Marriott Victoria & Albert, a five star place just up the road from Old Trafford. We drove up on the Friday so spent two nights, all paid for with Tesco clubcard vouchers. What a great feeling that was handing over these vouchers when faced with a three hundred quid bill!

Once we had found the room and unpacked, i decided a boozer and a curry house were on the agenda. Manchester's curry mile is world famous and my lamb bhuna certainly lived up to all expectations as did some of the local ale.
Manchester is a beautiful friendly city from my experience, yet according to Heidi this didn't deter me from entering full cockney mode. It seems that when I'm far from home i have a safety blanket that comes out! The London accent gets stronger and my use of rhyming slang is far more evident.
Well, you need to let these Mancunians know who's boss don't you!

Saturday and the day of the wedding. After pigging out on the complimentary fry up and having far more than i needed we sat in the bar for a quick pint before the off. We had to set the sat nav and the bar seemed by far the most sensible place to do it! Plus a little taster just to get us in the swing of the day ahead you understand. We then departed to Bury, home town of the bride.
The first thing i noticed was Gigg Lane, not quite as impressive as Old Trafford! We saw the ground driving around Bury whilst the sat nav refused to admit it was lost. The normally polite lady seemed to change her tone as i refused to take the third exit off a non existent roundabout. She also seemed insistent i drove through a pedestrianised part of the town centre!

We did eventually find the small church, parking in a cobbled side road. This was a real Coronation Street type experience which made me chuckle and helped make my trip up north complete.

I was on best behaviour throughout the weekend. The biggest achievement was not getting drunk, just a little merry, whilst nearly as impressive as that was my restraint in the church. Not once did i look at my phone to check the score during the service. 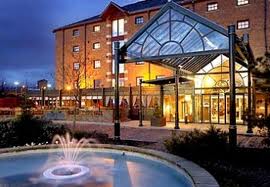 On return to the hotel we were all ushered in the bar for a glass of wine whilst some photos took place by the grand entrance. The bar just so happened to have a large screen showing sky sports news. Myself and another lad stopped dead in our tracks to check how our respective sides were doing as the second half was underway by now. I was by far and away the happier of the two as we were four up and his Barnsley side were on the receiving end of a hammering.

If Charlton are going to put four past a team (and save a penalty) you can guarantee I'm not going to be anywhere near the ground. I've been racking my brains all day and I'm sure Southampton opening day all those years ago is the last time I've seen us put a hatful past a side.

As the beers went down Barnsley cheered up a bit and turned out (along with his fiancee) to be great company, another side's results to keep half an eye out for. We agreed about many footballing issues but agreed to disagree on a certain Neil Redfearn!

The wedding reception went well and gave me many a laugh. The father of the bride speech went on and on, drifting totally off subject at one point as he started complaining about his energy bills. These northern folk can't half talk. It's just such a shame the best man couldn't. He sobbed and stumbled his way through a handful of words before giving up. We were so sympathetic on the outside yet hysterical inside. I was reminded of James Corden's character Smithy and his best man speech in Gavin & Stacey.

As if this wasn't a good enough memory to cling to from the day, the food came out and our lamb and vegetables lay on a bed of mushy peas. As a Sarf Landan boy, i felt very privileged to be treated to this delicacy and scoffed it down.

We had the traditional wedding band playing all the old favourites, but they got better and more adventurous as the evening progressed and did a wonderful cover of Pulp's Common People. The singer/bassist seemed in my slightly inebriated condition to be far too good to be playing these type of gigs.
The night was rounded off a treat when trays of bacon sarnies came out. A lovely touch that went down a treat, something to soak the beer up before retiring for the evening. I'd lost track of Barnsley a few drinks before this. I think he'd already left so i had his as well. I'm sure he'd of approved.

Today we drove past Old Trafford on our way home an hour and a half before kick off of the Manchester derby. We had already seen a fair few United supporters in the hotel who had flown in the day before for the big match all of whom had a big smile on their face. How the whole place seemed to be buzzing! I felt a little disappointed i wasn't going what with being so close, but drive past we did. On arrival home i couldn't believe my eyes as i looked up the score. How i would have liked to have seen those same faces this evening.

A good weekend then both for myself, the happy couple and all those with a love of Charlton Athletic. A great response to the defeat at Stevenage, i personally am glad to see young Chris Solly back in the starting eleven. I've only seen a handful of minutes highlights but it sounds like he had a great game as did our other full back Rhoys Wiggins. Add to that two goals for Yann the man, a beautiful finish from BWP and some comical keeping to help Danny Hollands shot from distance find the net. Hamer's penalty stop and a hard working performance from Andy Hughes in the middle in the park and it's of no surprise that every Addick woke up with a smile from ear to ear this morning.