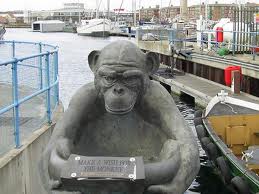 A brace from Bradley Wright-Phillips plus one apiece from Danny Hollands and Scott Wagstaff secured a very comfortable 4-0 away win in the north east at Hartlepool United. That monkey wasn't just hung, but skinned and eaten for dinner to boot.

Yesterday for me was a shining example of the difference between this squad and that of last season. After the midweek win at Wycombe, and the soaking up of pressure at the end, the Addicks travelled north full of confidence. A long trip to a mid table side would have caused us a mountain of problems previously but not any more. Again we took control early on and Hartlepool never really recovered.

Chris Powell kept faith with the side that beat the chairboys, Andy Hughes keeping his place in the centre of the park. It's a good situation to have when the early season starlet, Dale Stephens, is going to struggle to regain a starting eleven place.

Rhoys Wiggins who only a couple of months ago was getting a little bit of flack from the Valley faithful has started to show why the gaffer was so keen to buy him. He races forward and poses a threat with each venture, how he must thrive in having a left back as his boss.
With the front two starting to sing from the same songsheet, and a midfield more than willing to pitch in with the goalscoring duties, this Charlton side has not only taken shape but gelled into a well oiled machine.

Stronger tests than a poor Hartlepool side will come but with confidence sky high, we have the ability to play any side in this division off the park. We had our first set back up at Stevenage and now we have seen exactly what this team is made of with nine points out of nine, ten goals and two clean sheets. Yes, i still have to pinch myself.

A little distraction came today with the draw for the first round proper of the FA cup. Cups and Charlton really haven't gone together in recent times and I'd absolutely love a little cup run and a chance to do battle with a glamour club. The thought of seeing The Valley full in a third or fourth round tie is a wonderful image, and no side in the country would relish that task the way we're playing at the moment

First however we have the small matter of FC Halifax Town of the Blue Square North at The Shay.
We had to endure tough battles against non league opposition in the past, who could forget Dagenham drawing at our place or the trip to Northwich (not for the want of trying). Just last season Luton, who i still find it hard to think of as non league, gave us a scare and took us to a replay.

It's not the nicest of draws but at least The Shay is one of the best grounds outside the league and won't feel too different an environment than some of the League One grounds we've become far too accustomed too.

On the subject of the FA cup, Sutton United's name was still in the hat today. One time FA cup giant killers, the reward if they can overcome local rivals Leatherhead is a home tie to Kettering Town, a side i last saw down Gander Green Lane back in the GM Vauxhall Conference days.
Like i say though, there's the small matter of dispatching Leatherhead first. The Tanners who are bottom of the Ryman League Premier division gave a battling performance on Saturday to earn a surprise 3-3 draw.

Although it wasn't in our favour i do still love the FA cup and these sort of performances. When the first round proper does kick off next month you can guarantee there will be an upset or two.
Lets just hope it's in Sutton and not Halifax!