Wy combe away with the points 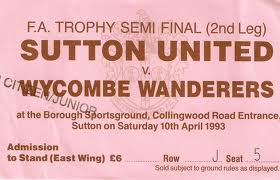 All through my childhood and teens, Wycombe Wanderers were great rivals of my non league heroes, Sutton United. It stems back to the Chairboys time in the Isthmian League, we were two of the big fish fish in that smallish pond.

Wycombe of course have outgrown the non league pyramid and, along with Yeovil Town, have become one of the real success stories of automatic promotion between the old fourth division and the Gola league. Or GM Vauxhall Conference as it was known when Wycombe won it.

They have become in the past few years a little bit like a lower league West Bromwich Albion, a yo-yo side. True to form, this season is already looking like it's going to be an uphill battle for them to hold on to their League One status. All the makings of a banana skin for the addicks then!

Charlton however took the lead after only six minutes when Yann Kermorgant's spectacular overhead effort bounced back off the upright for Bradley Wright-Phillips to latch on to. No better way to steady the nerves than an early goal.
The striker, who is far superior than his brother if you speak to anyone from SE7, then reached double figures for the season when he found the bottom corner after receiving the perfect pass from Danny Hollands just before the interval.

Charlton wouldn't be Charlton if we didn't make things a tad nervy as the second forty five progressed. Wycombe pulled a goal back just pass the hour when Stuart Beavon netted after Ben Hamer had denied the home side twice in quick succession.

The final whistle was music to the ears of the travelling support as there were a few worrying moments in the latter stages of the game but the Londoners held on to take a very valuable three points on the road. Another tough trip follows on Saturday when we visit the monkey hangers of Hartlepool. Tonight is a great platform to mount that challenge on.

Huddersfield dropped a couple of points at Scunthorpe meaning Charlton are now three points clear at the top and five clear of the blue half of Sheffield in third.
A clear bit of daylight which is very welcome looking at the fixtures we have in November!

Chris Powell has certainly built a team that has bonded well and gelled on the field. I expect the board at Leicester are ruing the day they let him leave, now they've axed Sven Goran Eriksson.