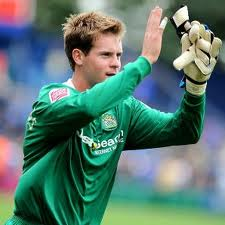 He looks like such a nice lad doesn't he? And I'm sure Rochdale and Stockport fans will be quick to tell me that he is. Owain Fon Williams is now first choice goalkeeper for Tranmere Rovers and he 's fitting in a treat.
You see, even before yesterday's league fixture, the lads from the Wirral had a reputation for playing by stretching the rules a little and running the clock down. The young Welsh shot stopper has adapted to this 'style' of play like a fish to water.

After the great results on the road and the bumper crowd for the last home match, everything was lined up to continue this momentous start, the blip in the paint cup aside of course.
We were back to picking our strongest side and Chris Powell made two changes to his regular starting eleven. No, it wasn't Doherty and Alonso but Green and Kermorgant in for Waggy and Paul Hayes.
I don't think anyone was surprised to see the Frenchman get a start after his superb substitute performances of late.

With so much promise beforehand, it was a little surprising to me that The Valley was as flat as a witch's you-know-what in the first half. 15,000 fans had very little to cheer as Tranmere stopped us playing the neat passing game we are coming to expect. If their game had been a little better you could have been forgiven for thinking Brentford were back in town. I remember tweeting in the opening half that we looked like Chris Powell had actually won that dreaded manager of the month award!

It was therefore no surprise that Tranmere opened the scoring, although in fairness our defensive play wasn't as shocking as it was midweek. A little bit of luck with a deflection off Chris Solly and Tranmere's Adam McGurk shot home. The deflection left Hamer, in the Charlton goal, no chance and although fortunate for the visitors, it had in fairness been coming for a while. We had failed to put any authority on the match and had been duly punished. Half time and a goal down.

I'd met former club director Mick Gebbit outside the ground prior to kick off and he had told me how a good friend i hadn't seen in years, Mark Garvey, was at the game.
Mark was one of the original Charlton drummers in the old covered end and we had become close friends. He came to my first wife's funeral and even organized a collection in the north stand for flowers all those years ago.
So at half time i knew to get a quick pint in and then go searching for him. Fortune favoured me though and as i turned away from the bar i saw Mark grinning like a Cheshire cat two places behind me.
His resounding comment? Al i can't get over how normal you look! I suppose he's got a point, last time we met i had a peroxide mohican.
There is something wonderful about greeting a long lost friend and yesterday was no exception. We watched the second half together and no matter what the final outcome of the game was to be, my day had been well and truly made!

I guess there was no real surprise as to that outcome considering we drew one all twice last season. Johnnie Jackson levelled for us with just over ten left from the spot. Eventually.
Tranmere did everything they could to stop our skipper from concentrating on the spot kick.
After bickering around the area which seemed to last forever, our friendly sporting keeper removed the ball from the spot whilst the man in black looked the other way.
The ref did warn the young man for time wasting more than once during the afternoon but i fear if he'd seen that he may well have scribbled his name in the book.
Super cool Jackson fired the ball home to send the Valley faithful wild. Never has a penalty needed to be converted like that one did.

The sign of a quality side is one that can still come away with a point against opposition that is determined to stop you playing one way or another. On paper it's a game we should have won but I'm content with the draw under the circumstances, we are still top of the table and still unbeaten.

We'll have a lot more to offer when the front two gel a little better. Wright-Phillips took a real battering early on that we all felt and I'm not sure he was 100% afterwards.
Yann Kermorgant looks a quality act although it didn't look like others around him read the game in quite the same way. Once they're all on the same wavelength..........
The only criticism i have of the fondly nicknamed 'Kermit' is that he looks like he goes to ground a little too easily at times. But he is French i suppose.

Years ago when we faced any scousers we sang 'sign on sign on, with a pen in your hand, and you'll never get a job, you'll never get a job' to the tune of that Merseyside anthem.
If any future prospective bosses saw yesterday's behaviour, Tranmere's young goalkeeper may well discover this for himself.

Posted by algordon_cafc at 6:30 PM