The magic of the third round 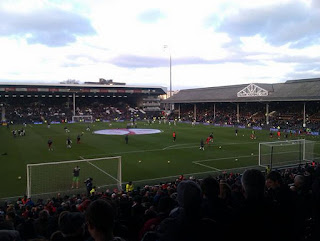 The FA cup. It's always special whether you're watching a combined counties league side in the preliminary round or the worlds finest at Wembley in the competitions showcase.

The third round is probably the most special round of all. The non league survivors get their chance of national limelight whilst the big boys are worried of humiliation. The fact that the third round always falls on the weekend closest to my birthday adds to the magic as well.

The greatest third round memory has to be Sutton's defeat of Coventry City at Gander Green Lane, three days before my eighteenth birthday. That however is a story for another day, but yesterdays experience is definitely going to be a cup memory which will stand out for years to come.

With over 7000 addicks descending upon SW6, all of whom in party mode, this London derby match was always going to have an electric atmosphere in the Putney end stand.
I arrived in Putney early as for once i didn't have to work the morning. I was making the most of this and was determined to have a good day on the beer.
Walking down Putney High Street at half eleven i was struck by the number of Charlton fans already there. It seemed that i wasn't the only one making a day of it.
Another reason it was special for me was Putney being an old stomping ground from my twenties. I saw many a band in The Half Moon amongst other pubs, myself and my friend Jim reminisced on how you used to get stuck to the carpet in there. Many a good pair of shoes ruined! One such old haunt was The Dukes Head, a Youngs pub by the river. This was my first stop yesterday but we moved on to The Bricklayers Arms which is a highly awarded real ale pub, well loved by large men with beards who like to chew their beer. We were spoilt for choice and tried many different ales although i was partial to the Pressed Rat & Warthog!
Myself and Marco were a little concerned for our mate Jim who ordered a pint of some lethal draught cider just before we left, but I'm glad to say he survived it and went back for more afterwards!

So we crossed the river and went for a stroll through the park en route to Craven Cottage. Last time i went we had terracing to stand on, this time a new stand which had a very temporary feel to it, especially when 7000 addicks started bouncing.
Charlton were in great voice and no matter how Fulham tried to drown us out with their music over the tannoy, we could still clearly be heard. Unlike the Fulham support. I can't honestly recall hearing one song come from the home areas. I appreciate they must get a lot of rich upper class fans in Fulham, but there must be a section of them from the Roehampton council estates. I expected a little more from them, very poor support.
One thing i will say about our fans is the content of the songs. At a time when racism is raising it's ugly head again and reports of a SMALL section of Charlton fans singing racist songs to Kevin Lisbie at Orient, i can honestly say i heard nothing like that at Fulham. Valley Floyd Road was awesome, the others songs good natured. Obviously Danny Murphy got booed but nothing untoward.

Fulhams performance on the pitch was a lot better than their performance in the stands. In the middle of the park they showed some of the quality you expect to see in top flight football but for all their moments of flair, Charlton equalled it with grit and determination.
Bradley Pritchard, who only a year ago was playing non league football, looked well worthy of his starting place and Chris Solly was immense again winning balls full backs from a higher level would have struggled to win.

4-0 definitely flattered Fulham. Two goals which took deflections and a penalty that was very dubious meant Fulham and Clint Dempsey had their stroke of luck. At half time at only one goal down, i really felt we still had a good shout on the game. For twenty minutes at the start of the second period we really threw everything at them and on another day Bradley Wright-Phillips would have done a lot better than he did with his finish when he was through on their keeper. If we had clawed it back to 1-1 i think we could have gone on to get another but it wasn't to be. Fulham got their second though and after that it was really all over. It's a shame that in years to come people will see the stats and forget how well Charlton actually played.

The support was fantastic at Fulham, if those travelling to Sheffield Wednesday next Saturday can get behind the team to within a small percentage of what we did yesterday, we will once again have the twelfth man and have to raise our chances. It was definitely a proud day to be Charlton.

Another point of interest for all addicks was Paul Benson scoring the winner, and his first goal, for Swindon in their giant killing at the hands of Wigan. We all wished this well loved addick the best of luck at Swindon and that is a great way to start his account there.

Back to the Bricklayers for a few post match beers rounded off the day nicely. The result didn't really matter, the performance was what counted and everybody had a great day out. It will stay in the minds of fans and players alike. The magic of the third round!

It's the Sheffield sides now. This is a big big test for Charlton and the promotion push. Hopefully Sheffield Wednesday won't have come back down to earth after their cup win over West Ham. Far more important than the FA cup, thank goodness we didn't get a draw at Fulham and have to have a replay in between them!

Come on you reds!
Posted by algordon_cafc at 7:53 PM