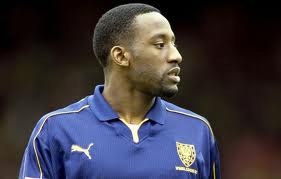 Jason Euell has signed on loan with the south London club for five weeks and is expected to be in the squad to face Port Vale on Saturday.
Unlike the supporters of everybody's least favourite neutral club up in Buckinghamshire, these fans will remember seeing him turn out for the Dons first time around.  How lovely would it be to see him do what the Frenchman did on Monday night and wear his scoring boots to mark his homecoming.
It's fair to say those die hard Wimbledon supporters will see a different footballer than they did last time he wore the blue shirt. He is a shadow of his former self in match day performance although he still has a fantastic footballing brain. Similar in some ways to the great John Barnes during his stint in SE7.

As the season progresses for Wimbledon it has become obvious to us all that their honeymoon period has finished. Financially worse off than many of their opponents, it is this gritty part of the season where his experience will benefit the young players in the dressing room and give their fans a renewed sense of hope. With the rich kids down the road in West Sussex blossoming it would be an absolute delight to see their poorer compatriots doing the same.

Speaking of AFC Wimbledon a local paper, the Wimbledon Guardian, is running an on-line petition to get Milton Keynes to drop the 'Dons' from their name. Whether any good will come from it i don't know, but it's got my support. Football heritage is important and hard earned. The real Dons work harder than most!

We've seen the Paul Benson, Leon Clarke deal go through recently, today it was announced Leon Cort had signed permanently.
With six appearances for the addicks so far this season on loan, the defender has made it permanent after being let go by Burnley earlier in the week.
Cort has proved he is great cover at the heart of the defense, especially in Charlton's last outing at The Valley against Brentford and is a welcomed addition by all except perhaps the ginger Pele, Gary Doherty!

Charlton's official twitter page stated today that there hadn't been any breaking news for a while. Of course with transfer windows these days players all seem to move at once but the backroom staff keep that door spinning all year round. Look at Tony Jimenez.
I think we could see more 'breaking' news this week if the rumours are to be believed.  Jeffrey Schlupp's name has once again been on people's lips as it was pre season but it's Danny Haynes that seems the more likely.
Haynes is currently with Barnsley and word is the Yorkshire club have agreed a fee with Charlton. Others were interested in the former Ipswich striker including Millwall, but they just wanted the player on a short term loan deal.
Nothing is cemented until the club announce it and these days we've all read it on twitter and the like a long time before it's 'official', but it shows Chris Powell is still keen to add to his forward options during this window.
Onwards and upwards, I'm not sure but i think he'll be number twenty four?
Posted by algordon_cafc at 8:19 PM