It's Green in Devon 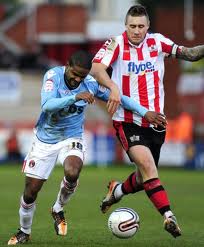 828 Charlton fans saw the Addicks win in Exeter yesterday. That brings the total number of living Addicks to see a Charlton side win there to 828. It's been that long, 83 years in fact.

There was a time not so long ago when 4-0 was the typical Charlton scoreline. We seem now to becoming masters in slugging out our victories in a 1-0 fashion.
It was always going to be tough at Exeter, they have a great home record and typify the sort of side that can bring Chris Powell's high flying team back down to earth with a bump. With the home side playing five across the back we knew we were in for a tough afternoon.

Matt Taylor made a fond return to a club he made nearly 150 appearances for, as did Addicks keeper Ben Hamer who was in the same part of Devon this time last year on a loan deal.
Bradley Wright-Phillips returned to the west country to a tirade of boos from the home support. How he would dearly love to have ended his goal drought ( i think it's ten games now) against the Grecians and quieten down those boo boys.
He'll still have to wait though as Exeter's rugged defending gave the front man very little opportunity.
I for one can't wait to see his goal celebration when it does come. I feel their is a lot of frustration building up inside the lad and when he scores he's going to go off like a firecracker on bonfire night!

It wasn't just Wright-Phillips who found the going hard, Exeter didn't allow us many chances to play the flowing football we've become accustomed to.
A goal did come, but even that was fortunate. 'Lucky' Charlton strike again. Danny Green (how Exeter love green!) crossed from the right only for the home keeper to fumble the ball across the line with his hands and the use of the post. That was the first goal conceded by Exeter in five hours of football.
Harsh on Exeter who had a game plan and stuck to it, in fact they had a chance or two near the end as Hamer had his now customary five minutes of flapping, although the keeper did make a great save from a powerful close distance shot from Spanish striker Guillem Bauza.

Dale Stephens was one of the substitutes to get a run out for the last ten minutes. Bradley Pritchard has done well of late as Danny Hollands latest partner, Stephens will be keen to get back to full match fitness and get that spot back. A great time of the season to have such healthy competition in the middle of the park. Normally by now we're looking at suspensions and injuries!

With both Sheffield sides in cup action, we have gone to nine points clear of second, Huddersfield, with a game in hand on them. The steel city sides have played as many as us and occupy third and fourth. Both are ten points behind.
Home games this week against Bury on Tuesday and Rochdale on Saturday are ideal opportunities to build on the points tally.

Twitter was full of excitement, as was the BBC radio show 606, later Saturday night as club captain was on the train home with many Charlton fans and putting his hand in his pocket to buy drinks.
A future member of the Charlton Athletic 'hall of fame' this boy for sure!
Just another example of what a great football club this is.

Come on you reds!
Posted by algordon_cafc at 5:59 PM