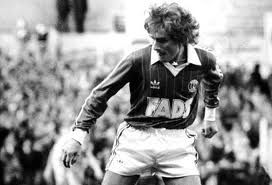 My knowledge of DIY superstores, or for that matter, small little local hardware stores is, I'm proud to say, very limited. I do remember a branch of FADS in the high street though back in the early eighties.
This is where my father just had to shop for paint and wallpaper. Well, i was of the opinion that if it's good enough for Allan Simonsen it's good enough for us.

My dad, having no interest in football, obviously declined the use of my helpful eleven year old logic and bought his domestic happiness and brownie points in the cheapest emporium available to him.
The point is, only decorating anoraks and Charlton Athletic supporters will look back at this forgotten high street name with fondness.

I'm not really one for shirt advertising on the whole though. My first replica shirt was a red Liverpool number as worn by that footballing legend, Emlyn Hughes. This just had a yellow Liver bird and Umbro badge.
Football of course in those days was relatively untouched by the financial evil which has prostituted many clubs to within an inch of their lives. We did have advertising boards, but they were sporadically positioned around the edge of the pitch, Texaco being an example. In those days if you draped your scarf across it stewards didn't demand you remove it and threaten to eject you.
Nowadays you have to hope for an empty area of seating to display your flag or banner across, and even then only if authorised first.

The point is, i could associate with FADS. In the same way we could associate with Crown Paints (Liverpool), Solvite (Watford) or Wrangler (Nottingham Forest). These were brands we could choose to spend our money on over their competitors.
Look at the drinks industry for example. Holsten (Spurs), Ind Coope (Leicester), Guinness (QPR), Skol (Forest again) and my favourite, Newcastle Brown Ale (i so want to type Sunderland).
All these could perhaps persuade supporters to spend their pennies on the product in question. So much so that Tennants sponsor both Celtic and Rangers to avoid one set of fans boycotting the beer rather than be associated with their bitterest of rivals. I believe CR Smith, NTL, and Carling did the same.

I can say from experience that supporters will boycott products due to a rather healthy dislike for all things _________ (enter as appropriate). Throughout the nineties if i needed any media for data storage you can bet your bottom dollar i wasn't buying TDK! And to this day I've never used Churchill for my motor insurance.
Mind you, i never bought a Viglen or Mesh computer either but we'll gloss over that.

It wasn't just the drinks industry, other household names were emblazoned across your bedroom wall on posters pulled from football magazines. If you wanted a new cassette player or even a revolutionary beta max recorder would you choose JVC (Arsenal), Sharp (Manchester United),  or Philips (Manchester City) to go with the Saab you bought the season before?

These were choices we had, but today, and there are exceptions,  it's all lost a bit of that homely feel. There's plenty of on line betting companies which isn't appropriate for youngsters to wear, hence they take the name off junior kits. This of course means your kids shirt isn't the same as his heroes. It does go to show how mainstream and acceptable gambling has become. I've nothing against a little flutter, but once upon a time the pools was the only acceptable face of sporting betting.

Airlines still enjoy maximum publicity with Fly Emirates (Arsenal) and Etihad (Manchester City) seen by millions each week. I hope they fare better than both British Midland (Derby) and British Caledonian (Brighton) did. Personally, the only airline i feel is within my reach is easy jet. Not that I'm boasting or anything you understand.

Then there are those who you have no idea of their wares. Charlton had Redbus, I'm still not sure what i was promoting there. AON (Manchester United), well, I'd have to google it. FxPro (Fulham) again no idea, maybe i just live a very blinkered life. In fact Manchester United have had a theme of late as i haven't a clue what AIG do either. How those millions were wasted on me.

Some of the best sponsors came in for personal reasons. Wet Wet Wet had their name on their hometown club Clydebank, whilst former Housemartin Norman Cook instigated one of the longest of shirt deals with Brighton. During his days as Fat Boy Slim, his record label 'Skint' was the word of choice on all blue and white striped shirts on the south coast.
A great way of making potential muggers think twice.

Recently on reading an article on BEKO fridges catching fire, i wracked my brains to try and remember which poor set of fans may have once been tempted to part with their hard earned on said brand of kitchen white goods. Oh yes, Millwall, that was it.

To summarise then, I'm not totally against shirt sponsorship. Just keep it relative to it's audience. It's the working class man who is going to walk around with the company name on his chest as opposed to those guests enjoying the match in a box sipping champagne and eating prawn sandwiches. They may be influenced on chartered accountants or solicitors, but we're really not that bothered about such things.
Next time Charlton, how about Fullers and a shirt with a London Pride logo on the front?

Nowadays unfortunately we are starting to see the continental trend popping up throughout our leagues of the selling of any space to advertising. The back of shirts, shorts, socks, it won't be long before our players are decked out like formula one cars.
I dread the day Charlton have sponsorship on the back of the shirt, please don't get me started on that..........

Posted by algordon_cafc at 8:08 PM