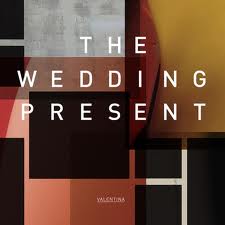 One of my favourite moments in Spinal Tap is the cabbie 'quoting' old blue eyes that "it's better to have loved and lost than never to have loved at all".
Would Alfred Tennyson have seen the humour? I don't know, but one things for sure, It's a saying that has proved to be true for David Gedge. The Wedding Present front man has made a career from it.

Valentina is the bands first studio release since El Rey four years ago. We had heard a few of these new songs last year as the band incorporated some into the live sets they played. With the modern age of 'you tube' etc, a new release isn't necessarily that 'new' anymore but i still got overly excited when the postman delivered my pre ordered copy of the CD at the weekend. I haven't listened to anything else since.

First impressions are of course always with the album artwork. Unfortunately for Gedge and co they started with a masterpiece and the now iconic George Best album. It's all gone a little downhill since then although i do appreciate the simplicity of all their offerings. This latest effort though reminds me of one of those dreadful, countless 'modern art' canvases available from all good home furnishing stores. I guess I'm just lucky having a wife that insists on doing her own artwork to decorate our flat rather than buying this mass produced tat.
In fairness, as far as the sleeve design goes, i shouldn't really gripe. It's better than anything i could conjure up and some poor design company put many hours into it. Well done them.

It's the music that matters though and we are certainly not let down here. Your Dead is a very punchy opening track harking back to Seamonsters routes. Although a strong song, it's probably my least favourite on the album. It's followed by Valentina's first single You Jane.
As singles go, it's certainly no Kennedy or Brassneck but then the whole album is a little more structured than that. As wonderful and timeless as these past classics are, Valentina is far more musically complex than those early days.
There isn't anything on here which would warrant a Top of the Pops appearance (if Auntie Beeb hadn't killed it off). No, this is an album for the connoisseur. The Wedding Present have become middle aged like the rest of us, both physically and musically.

Throughout the forty or so minutes we are treated to the delight of Gedge's guitar, grinding bass lines from the wonderful Pepe Le Moko and some thunderous drumming from Charles Layton. On End Credits he's even joined by guitarist Graeme Ramsay on a second kit!
The tempo changes, not just from song to song but as is the norm now for TWP, mid song as well. One second David Gedge sounds like he's serenading you, only for moments later despair and disappointment to come crashing down all around. Meet Cute is a prime example of this.

The Girl From The DDR is, for me, a real highlight. It could have fallen straight out of Take Fountain (along with 524 Fidelio) as it has a definite Cinerama sound, Le Moko's German backing vocals on it are simply sublime.
Along with End Credits, these are the two real stand out tracks although the whole of the second half of the album is as good as anything released previously to sport the Weddoes name.
It may not be the best album to convert anyone to the music of David Gedge but it's a must have for anyone already there.

This year we are being treated to The Wedding Present touring their awesome 1991 Seamonsters album. I'm very much hoping that, God willing, in 2033 they'll be touring their by then classic Valentina.
See you at the edge of the sea...........

Email ThisBlogThis!Share to TwitterShare to FacebookShare to Pinterest
Labels: The Wedding Present