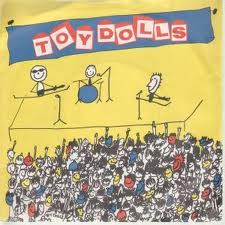 'Everybody Jitterbug' sang The Toy Dolls in homage to a dance craze from yesteryear. The dancing in Charlton today was all done by way of celebration in the Jimmy Seed stand from the visiting supporters.
The home side contributed by means of providing the jitters. And plenty of them.

Jonathan Forte isn't a name we'll forget in a hurry in SE7. His first half hat trick helped stun The Valley faithful into a state of shock as Charlton left the field four goals down at half time.

After the first home defeat of the season at the hands of Colchester on Tuesday, i did wonder how we would react. It could of gone either of two ways but none of us expected the rout we saw today.
Notts County are putting together a strong bid for a play off spot and were never to be taken lightly, but we are top of the league, by head and shoulders, and should not collapse like we did for forty five minutes today.

County came out of the traps brighter than Charlton and the Addicks looked complacent even before the first goal. Another shot from distance, lacking in the quality of Tuesday's however, put the Magpies in front. Two minutes later Forte got his first as the visitors seemed to bypass our defense completely and the hit man got on the end of a ball from out wide.
Number three was a contender for the next football nightmare compilation as Matt Taylor and Ben Hamer lacked any communication letting Forte get in between them to capitalise.
Another cross five minutes before the break and Forte got on the end with his head this time, completing a deserved treble.

The covered end was silent. That 6-1 defeat to Leeds sprang to mind and i wondered, providing we didn't do something drastic, whether i was going to witness something for the record books, just all for the wrong reasons.

Chris Powell's half time team talks must be something truly out of this world. It could be worth pretending we're behind before a ball is even kicked at ten to three next week.
Charlton came out and attacked the covered end like their lives depended on it. First Bradley Wright-Phillips, then young Scott Wagstaff (a thirteen minute substitute for the injured Danny Haynes) both netted within ten minutes of the re-start to half the deficit.

We sang we would win 5-4, and for a while we believed we would. In fact, if a blatant penalty appeal had been given for a foul on Wright-Phillips, it may well have been the greatest comeback many of the 17,000 would have ever witnessed.

After such a glum feeling during the first half, i relished the buzz of the second. Our glorious old stadium was absolutely electric as our two goals went in. It was on par with a draw a few years back against West Ham (4-4 i think?) for atmosphere. The place was alive!
Although it didn't happen and we dropped points for the second week running, i still left the ground content. If the second half had been no improvement on the first this post would have a different feel altogether but we showed the fight necessary to keep our season on track.

After the penalty claim, we did seem to resort a little to a hopeful long ball into the box interspersed with some nice build up play, just lacking in quality with a final ball. Things understandably seemed a little rushed on the pitch as the clock ticked away and it was obvious the players were frustrated, but it's refreshing after last season to see the team feeling the pain of defeat as much as the paying supporters in the stands.

I really hope this is a blip. Scunthorpe away next Saturday won't be the easiest of fixtures to turn things around but if we hadn't just suffered these two defeats we would have gone up there fearing nothing.

We are of course Charlton and we have never done anything the easy way. The job isn't done yet no matter how comfortable the table still looks. That infamous Charlton end of season slump is a scary thought but I'm sure this current side is too good for that. The second half today showed that, didn't it?