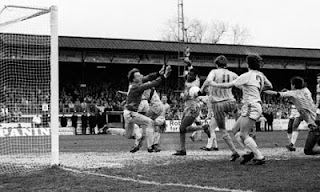 Should you happen to glance at either the #cafc or #swfc hash-tags on twitter, you'll see very little love from either set of supporters towards their counterparts. Of late, Sheffield Wednesday have escalated in the rankings of Charlton's rivals to a level just below Crystal Palace and Millwall. Definitely up there with the West Ham's of this world.

There are many contributing factors to this. On one hand, the clubs have met four times as 'big fish' in League One before getting promoted together last season. On the other, the clubs have shared a fair few players including Morrison, Llera, Lita and Semedo who all got a run out yesterday. Perhaps the biggest problem from the south Londoners perspective is Wednesday's perceived status. They are often regarded as a sleeping giant, a team that should be gracing the Premier League and it's grand arena, Old Trafford, St James Park, Goodison Park and the multitude of new Lego stadiums that abound. So the likes of Peterborough, and last season Rochdale and Hartlepool, are seen by many as beneath them. At least that's the impression I get. With all football clubs, Charlton included, there will be eighty to ninety percent of supporters who know the game, respect one another and generally would be lovely folk to share a pint or two with. Then there's the rest, quite happy to sit at a keyboard or nestle their smart phone in their lap tapping obscenities to rival fans, idiotic enough to take these brave words to heart and retort with an equally obnoxious 140 characters of drivel. How many of us thought we were too big for League One?

Sheffield Wednesday may not be a 'massive' club, but they are certainly a famous old name plying their trade at one of the finest traditional stadiums I've ever had the pleasure to visit. Other than a League Cup win twenty years ago, success has however eluded them, even we have won the FA Cup more recently that the Owls! If truth be told I think both clubs have found their level and have returned to a division entitled to be called home.

All rivalries have to start somewhere I suppose. Having won three league games consecutively, Charlton's hopes to make it to the end of the month with a one hundred percent record were high. A defeat, and Wednesday's first double of the season, were out of the question weren't they? A team already caught up in a relegation battle against a side in a rich vein of form. That would be a massive shock.

With only the highlights available to view (stuck at work I had to make to with radio commentary) it did appear that the home side were in charge. In the first half Michael Morrison hit the woodwork from three yards out when putting it in the net would appear to be a far easier option. This of course was to the delight of the away support in the Jimmy Seed stand whose opinion of our centre half is probably lower than ours of our former Charlton defender Miguel Llera.

The second half began in suitable fashion when Johnnie Jackson found the net. A Chris Solly cross was perfectly controlled by Bradley Pritchard who brought the ball down and in the path of our ever improving skipper. A goal that would have caught many still returning to their seats. Unfortunately the woodwork would intervene once again preventing the home side from doubling their tally during the afternoon.

Wednesday had opportunities to draw level but when a wayward shot went over the roof of the Jimmy Seed, Charlton must have thought the one goal was more than enough of a cushion. The Owls, on a superb run away from home, had other ideas though with first Reda Johnson and then substitute Leroy Lita both finding the net in the last five minutes of the game. Charlton had been mugged, Chris Powell made three changes at once in the final minute to desperately try and claw a point back but it was far too late. Often criticised for his substitutions, I know, I'm a culprit, the final whistle blew to a tirade of boos.

Two sides in the same division, eleven against eleven, the result isn't necessarily a shock, the manner in which it occurred however most definitely is.

This game only went ahead because both sides fell at the first hurdle in this seasons FA Cup. Whilst we slogged out a league fixture we'll hope to forget, other sides were stepping into the headlines on this, the fourth round of the cup weekend. If you wanted a massive shock, this was the place to look.

Millwall started the weekend by compounding Aston Villa's misery and knocking them out of their second tournament in a week. Villa have become a shadow of their former selves, unsurprisingly parting company with Paul Lambert before the weekends end.

Queen's Park Rangers did their best to steal all of Villa's limelight on Saturday by getting a good thrashing from MK Dons (Wednesday's conquerors in the previous round) on their own patch. Liverpool went one better today by crashing out at League One opposition in the shape of Oldham Athletic. The Latics rewarded with a pop at the blue side of Merseyside next!

Brentford held Chelsea, Leeds beat Tottenham, wherever you looked the shocks kept coming. The real massive shock came in Norfolk though. Norwich City of the Premier League fell at home to Luton Town of the Blue Square Conference.

I've struggled with modern football for a long time, having a television station claiming to be the 'home of live goals' and Manchester United getting their 300th consecutive cup tie shown live, football needed a kick up the backside to appease the working class, ticket buying football going  chap. Bradford, Luton and co have done this to some extent although I'd be lying (and only from a truly selfish perspective) if I said I was truly happy with the Hatters victory at Norwich. No longer can I now say I was present the last time a non league side defeated top flight opposition in the FA Cup. The seventh of January 1989, three days before my eighteenth birthday remains one of my fondest footballing memories, closely tucked behind the 98 play off final in my affections. Sutton United have found their name banded about this weekend through no doing of their own, and let's face it, all publicity for a small non league club is good publicity, but the real sting in the tail is that Sutton (and myself) went to Carrow Road in the fourth round only to get a real pasting to the tune of 8-0. Of all the places for that great achievement to be equaled!

Luton's reward is that of a visit from Millwall who infamously visited the Bedfordshire town for a cup quarter final back in 1985. Like Sutton, they may well have had their moment of fame but it's truly well deserved. Along with Bradford City in the League Cup, these really are massive but very welcomed shocks.

You can keep your Champions League, despite the FA trying to schedule the final as just another game, the FA Cup has truly lost none of it's magic.

Posted by algordon_cafc at 8:33 PM