Neuton and his law of motion 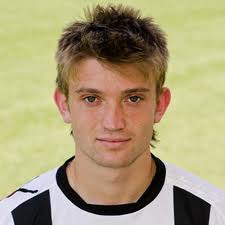 I fully expected only one name to stand out on New Years Day at Vicarage Road, a certain Mr Trevor Kettle. Yes that Mr Kettle, the one who supports Huddersfield. To his credit he put in a very average performance, he's treated us worse, and he gracefully left the headlines for someone else. A Brazilian named Neuton.

Neuton is currently on loan at Watford from Udinese in Italy, unsurprising in itself with Zola probably having a strong scouting network back in his homeland. This must also be where the young twenty two year old learnt the art of cheating.

Now before you all jump to conclusions, we have had a few lads ourselves over the years who go to ground a little too easily. A big French lad currently playing up front for the team springs to mind, although with Watford it didn't seem to be an individual choice, more of a game plan. Therein lies the problem. I'm picking on this one individual because he was playing a role nearest to the away supporters and in the best view, but man to man they fell to the ground so frequently it was hard not to mimic Ray Wilkins' overused catchphrase. Their number 41, Fernando Forestini (also on loan from Udinese), was also a main culprit especially during the first half when again in plain view of us.

It was quite evident during the second half how much the traveling support had got to Neuton. His interpretation of the law of motion included force, velocity, mass, and most importantly, downward movement.

I am of course deriving this opinion of Watford's tactics solely on the basis of one match, however if this is a week by week event i feel sorry for their, largely silent, fans. In that particular respect Vicarage Road was very similar to Craven Cottage. I would rather see a team lose every week whilst trying to play football in a largely legal fashion than see a team battle for promotion immorally. If you look again at Watford's third goal they played some lovely football and are obviously more than capable of doing it 'the right way', which makes the niggly stuff even more infuriating.

For our third goal, and to pull level, Ricardo Fuller did wonderfully well in the box 'staying on his feet' (as Ceddy Evina had done earlier for our second) when he could so easily have gone down hoping Mr Kettle would take pity and point to the spot. A small little victory for real football.

As for the game itself, what can i say. Seven 'legal' goals, three more disallowed, a real roller coaster of emotions. Credit must go to the groundsman for what can only be described as a gorgeous looking playing surface, enhanced by the glorious winter sunshine.

After sloppy defending for the Watford opener Charlton showed great resilience coming from behind twice and leading at half time. The Johnnie Jackson header that sealed it from a corner was strong, determined and summed up everything about the Addicks performance. This had been coming for a while and once again was helped by awesome vocal support. It was our turn to be the twelfth man, in much the same way as we had been for the home fixture against Cardiff back in November. The youngsters down the front, the Red Division, were superb and was was fitting to hear a song in respect of the Captain, a old diehard away traveler who regrettably died earlier in the week from cancer.

I had a good feeling about the game before it kicked off expecting to snatch a win and witnessing two very drab sides not fully awake due to the early kick off after the new year celebrations. We didn't snatch the win really though, no matter what order the goals went in. From midway through the first half Charlton wanted this and were stamping their name on the game. Just look at Jackson's face as he celebrated the winner, not to mention the fist clenched air punching from the whole side as they thanked the supporters at the final whistle. It was a momentous Charlton result, almost to the point of being season defining. We knew it in the stands, they knew it on the pitch.

Jordan Cook picked up a rare outing coming on for Lawrie Wilson who had to leave the field with a facial injury whilst the compelling Fuller gave way for Rob Hulse, making his Charlton farewell having now returned to parent club QPR. The charismatic Frimpong has also left the club returning to Arsenal. I have to be honest and admit my disappointment at seeing Hulse go. He may not be a big scorer but reads the game well, can supply a deft touch and runs his socks off. A very type-cast Charlton forward really.

After the game myself, Jim, Spanish, Catford Dave, Crispy and fellow Charlton bloggers Hungry Ted and Marco enjoyed a few real ale's as you do both in Watford and then back in Euston. As days out at the football go, this was right up there with the best of them. Thank you lads.

Now the transfer window is open be prepared for either a coming or going this afternoon, Chris Powell always waits for ten minutes after i post before announcing some breaking news. I don't hold that against him, or in fact hold anything against him after masterminding such a fantastic result Tuesday.