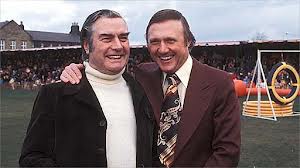 Stuart Hall used to laugh a lot. In fact if I remember correctly he used to laugh all the time. The action was certainly entertaining, never a dull moment and the winners would come back for another crack whilst the losers were forgotten forever. It's a knockout really was great family entertainment, unlike Charlton Athletic at The Valley today. The only similarity between the two is that the FA Cup is a knockout competition and that's exactly what happened to us. Even Stuart Hall would have found little to laugh at.

We fell at the first hurdle of the League Cup against Leyton Orient back in August and now we've fallen at the first attempt in the world's most famous knockout competition. It's fair to say we really aren't known as a cup side.

Speculation before the game centered around who would be not just rested but avoiding being possibly cup-tied too. Chris Solly was the high profile name absent from Chris Powell's squad, read into that what you will but Pritchard and Stephens, both of whom linked with Premier League moves this January ruined any chance of a cup final appearance today.

A disappointing crowd of just over six and a half thousand coupled with a below average (or rather below acceptable) performance saw Huddersfield walk out 1-0 winners, the gaffer was quite rightly annoyed and apologetic after the final whistle. He never dreamed of recreating the glory of 1947, although a little run in the competition would give a welcomed distraction for the squad. That quarter final appearance at Bolton Wanderers back in 2000 seems an eon ago now, a game you'll remember that Powell played in.

A defeat was of course no surprise to the majority of us Addicks, I had even predicted such an outcome earlier in the week when I was invited to be Buddy Bet's guest predictor.

Buddy Bet were gracious enough to sponsor the most recent Socrates bloggers meet up in London late last year where I met the very likable James King. James asked me to predict the outcome of eleven tasty looking third round ties for their 'Kicked Upstairs' blog. I correctly called Brighton's victory over Newcastle and West Ham's draw with Manchester United, beginner's luck you may say. Let's see who's still laughing when Mansfield beat Liverpool tomorrow and confirm my impeccable knowledge in such matters!

So it's back to the league for Charlton, a Wembley visit still ultimately possible as it's not too late to count out a play-off charge, especially if we can recreate the desire we showed at Watford when Blackpool visit The Valley next Saturday. This match is marked as the closest fixture to my birthday and a few ale's will be supped, hopefully in a double celebration.

Posted by algordon_cafc at 9:42 PM