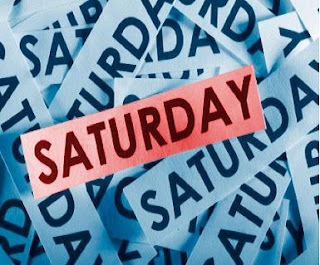 The advertising world has one main mission in its existence, to promote a product so well that either the product itself or it's catchphrase become an everyday phrase or saying. Part of the English language itself if you like.

When it works it drives you up the wall. There is a jingle from distant times past, 'Nice people to do business with' that I hum almost daily all these years later. I've no idea what company's television commercial contained it but it certainly left an impression on me. Mobile phone network Orange have certainly caught themselves a whopper of a catchphrase with their Orange Wednesday. It's not just a catchphrase, it's an event. The Blackpool Gazette must list it as one of their most overused headlines after a midweek Tangerine victory. Therefore I have no remorse in my blatant and shallow robbery. Yesterday was a Red Saturday, the first in SE7 this season.

Leicester, Cardiff and Peterborough had all previously come to The Valley this season and lost, yet not one on a Saturday afternoon. In fact, it was Hartlepool on the final day of last season that were the most recent team to suffer a Saturday defeat in Charlton.

As the game kicked off many may have thought a victory was the last thing on Charlton's agenda. The victory at Bloomfield Road back in October is one of the stand out results of the season so far, Blackpool were, don't forget, play off material last season. With their charismatic manager Ian Holloway now at Crystal Palace fortunes this season have proved to be a lot different, stability under new boss Michael Appleton seemingly essential to get their season back on track. So when news broke in the days preceding the game that the new gaffer had accepted an approach from Blackburn, belief we could do 'the double' over Blackpool rose considerably.

Fielding a 4-5-1 formation, we a looked a little slow in the freezing conditions. Blackpool were sharper with their passing and quicker with their movement, if anything it was ourselves who were there for the taking in the early exchanges. Matt Taylor had returned to the heart of defence due to Cort's injury and Dervite's suspension whilst Scott Wagstaff was enjoying a very rare start after returning from his loan spell at Leyton Orient.

Blackpool couldn't capitalize on their dominance despite an early brush with the woodwork, Hamer was rarely tested throughout, and I was starting to believe a rather demoralizing 0-0 draw was in the making. From somewhere out of  the blue though a chance was carved out as Solly played a through ball into the box. A visiting foot connected and changed the balls course, falling to Johnnie Jackson to roll the ball home from the edge of the area, catching the entire Blackpool defence on the wrong foot.

As many supporters were heading for the food kiosks to purchase a much needed warming Bovril, Charlton pounced again. Kermorgant was on the end of a cross, meeting it with a powerful header which the Blackpool keeper could only parry and it fell to Wagstaff who fed on the scraps like an abandoned dog not knowing where its next meal would come from. Speaking to an Orient supporting colleague, young Waggy didn't have the greatest spell at Brisbane Road. His confidence will have sky rocketed after this.

A 2-0 lead at half time certainly took our minds off the Arctic temperatures and gave one of the dreariest forty five minutes of football an almost unbelievable glow. There was a fair bit of stoppage time added on, due mainly to a head injury sustained by Matt Taylor. He played a large percentage of the first half giving a fine impersonation of Stuart Balmer with a white bandage wrapped around his head. Whether this was in fact worn for a medical reason or just seen as a cheeky opportunity to don some needy head wear for the conditions remains to be clarified, but I will say that Taylor wasn't at all afraid to head the ball once back on his feet!

I fully expected Blackpool to throw everything at us during the second half having come so far but alas, moments of note were fewer and farther between than before the interval. It was to be the substitutions that would adhere in the memory.

Chris Powell brought on young Callum Harriott who impressed from the start. The youngster had made some noises for us in League One last season but was one to suffer in the step up last summer. Opportunities hadn't just been limited, they had been non existent this term, so when he started a collection of step overs on an eclectic run into the box to win a corner the Covered End erupted.

My own personal memory will consist mainly of Bradley Pritchard's contribution to the resulting corner. As Harriott ran back towards the half way line to take up a defensive role, the aged and experienced head of Pritchard ran back to take Harriott's position and he sent the young substitute back up into the mix. I fully believe this is the first occasion in Pritchard's Charlton career that he's carried any kind of superiority 'clout'. From where I was sat he looked like he enjoyed it too!

The other substitution of note was the departure of stalwart striker Kevin Phillips. Sections of the upper north stood and applauded as he walked off much to my bemusement. I wondered if it had anything to do with that day in May '98, Phillips being to my knowledge the last remaining man still plying his trade at a professional level. I shouldn't look so deep into the actions of The Valley faithful. It was only in the pub afterwards that I discovered the player replacing him and the recipient of the applause was Nathan Eccleston, the young striker who was on loan here a couple of seasons back.

Eccleston would give Blackpool a moment of hope in the final minute of the match as he struck a peach of a volley from the edge of the area to pull a goal back for the visitors. It was all too little too late. A poor spectacle of a game finished with three important points in the bag, a first league double under our belts and the horror of the FA Cup showing the previous week forgotten about.

This season I'd quite happily take victorious unattractive football with great regularity as we aim to solidify our membership of the Championship. Here's to many more Red Saturday's!

Posted by algordon_cafc at 8:59 PM