A gentleman is simply a patient wolf. 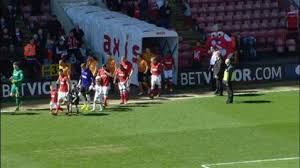 Yesterday The Valley was the epitome of gallantry and chivalry if you work on the basis of the late American actress Lana Turner's quote having any truth to it. The Jimmy Seed, to a degree, and the away dressing room (Dean Saunders especially) really would have appeared the most courteous and polite of wolves as there impending doom and successive relegation seem still a distant yet inconvenient blip on the horizon. If we were in the bottom three with just three matches left and Chris Powell didn't demand we throw everything including that well battered kitchen sink at the opponents I'd be pulling my hair out and spitting whole parakeets, let alone just bloody feathers.

The first forty five minutes were a typical end of season stroll in the sunshine, going through the motions, wish we were already on the beach, kind of affair. Two teams that were comfortable in mid table safety happy in the knowledge that they had perhaps over achieved in some eyes considering how little money they had or where they were only a month or two before. The good turn of form came just at the right time for these two sides and they can cruise into the summer break content with a job well done. Hang on, one of them are precarious at best, down the swanny at worst? You'd have never known.

Wolves nearly did take the lead in the one and only moment of note, action wise, during the first half. Karl Henry saw Hamer off his line and from just inside our half tried a speculative effort which very nearly bore fruit hitting the bar, and catching our number one out completely. His casual manner nearly his undoing as his panic almost caused a collision with the upright and I'm certain the keeper would have come off the worst.

We were forced into an early change as Andy Hughes was replaced by Mark Gower after only twelve minutes. Hughes has been the cornerstone in the side during this recent rich vein of form, I've no idea why he came off but with only two games to go it could well spell the end of his season. At his age and with his contract up it could even have been the final action of his spell at the club, or even at any club. I hope not.

Danny Green came on during the second period and things started to liven up just a little. The wide man has had very little opportunity and been well down the pecking order, so he used yesterday, as Scott Wagstaff did back in January, to show the gaffer he's still worth his paycheck every week. He played many dangerous balls into the box but the corner he supplied for Charlton's opener was one of the worst of the afternoon. It was only due to some comical defending that Dorian Dervite was able to latch onto a loose ball and give the Londoners the lead. The wolves at the opposite end of the ground no longer looked patient, more distraught.

They did get themselves back into it as Ben Hamer, for the second time during the afternoon, found himself flat footed and perhaps dare I say it a tad complacent. A long throw into the box was flicked on towards Kevin Doyle, the Wolves captain unmarked and apparently invisible. Hamer looked positioned to deal with the flick on but oblivious to Doyle. Two awful goals and we were once again all square. The away support was a little lighter in result though as stewards were quick to pounce upon supporters celebrating the equaliser.

Late drama has become almost expected in SE7 recently, Leeds bearing testimony to this only two weeks ago. Yesterday's game may well feature on the Dave television channel soon for it was the perfect repeat. Once again Charlton scored a winner at the death, once again substitute Jonathan Obika scored it, carving his name into Addicks folklore for all time. Danny Green had a good effort blocked by the visiting defence, foiling a committed goalkeeper, the ball fell to Obika who kept his head to finish decisively. For the third time in as many matches the home support were delirious! Many would wish the season still had two months left to run on this form!

For me though it was to be my exiting farewell. Two games left, first at Middlesbrough and then the visit of Bristol City, both of which out of my reach with first work and then a wedding being the culprits. Who gets married on the final day of the season!!??!!

Thankfully for us there will be nothing riding on it, the play offs are only just mathematically possible with the aid of a protractor and Bristol City already know their fate and have a sell sell sell policy put in place. Good job I'm not a gentleman then as it's most definitely going down to the wire for the Wolves.

Just as a footnote, the picture at the top of this post is of the teams walking on to The Valley pitch prior to kick off. Now I know we have a couple of mascots for the little kids (well they like that sort of thing the little 'uns), Floyd and Harvey, but I remember them being a cat and a dog. So can anyone tell me what that red thing is in the stand behind the tunnel? Yes that's the thing, the one with the huge eyes that looks like a deserter from Monsters Inc.

Posted by algordon_cafc at 9:55 PM