Let that be a lesson to you. 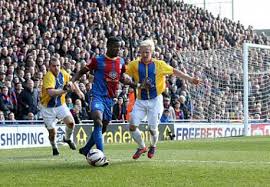 If you should ever feel an urge to pull on a Crystal Palace shirt be warned, Charlton will find out and will come to get you! Seriously though, poor old Barnsley had to don the Palace away kit on the demands of the match officials last week, and as if that wasn't embarrassing enough, they then had to endure Charlton's biggest win in forty one years the following week. How they must hate South London.

They did perhaps deserve it mind, remember those rotten Tykes did come down to SE7 in October for our 'carnival' atmosphere of 'football for a fiver' (a Charlton idea to entice a new generation of supporter to The Valley) and play us off the park ruining what would undoubtedly be some poor young lads first ever experience of Charlton Athletic.

Barnsley 0 Charlton 6 (six). It hasn't sunk in yet, I'm not convinced it ever will. Barnsley received a couple of red cards late on but don't let this influence your opinion of the result in any way. The first goal came after four minutes, the second after nineteen. This had all the hallmarks of the type of job Bolton should have done on us a couple of weeks ago. The difference was we didn't sit back content with what we had. No sir, we smelt blood and were going to give out a long overdue thrashing! Even bringing on Salim Kerkar didn't quash our appetite, the lad scoring with, I believe, his first touch.

It's great acclaim to the squad that all six goals are credited with different names. The full list is
Pritchard 4, Jackson 19, Kermorgant 48, Harriott 59, Kerkar 80, Fuller 90. Two strikers and four midfielders. It's the goals of the midfield that have perhaps put us in such a strong position now for the season finale, the captain's more than anybody. At the start of the campaign we really wondered if Johnnie Jackson had enough quality to make it at this level, now nearing the end there is no doubt whatsoever that his eleven goals have been pivotal in not only survival but the reality of a top half finish.

A certain Andy Lopata, a name many Addicks will know, made a very valid point on twitter today. We are witnessing our best form of the season and it coincides with the return of a certain Andy Hughes to the side. During our successful title campaign in League One last season our best form came with Andy at the heart of the midfield. If I'm correct his contract ends this summer. He may be 35 now but surely he deserves the offer of another year?

Back in the 60's scoring six goals in a game wasn't so rare. A 6-6 draw with Middlesbrough in October 1960, then two months later a pair of matches against Plymouth Argyle both ending 6-4, one to us and one to them. You have to go back to the 30's though to remember Charlton scoring six in successive games. To match that would mean a rout at Cardiff on Tuesday evening which would completely spoil a party. A draw against us will be enough to finally see the Bluebirds (yes, i know but I'm old fashioned) back in the top flight and alongside Swansea too. I wonder how many suits and businessmen north of the border in Glasgow will be spitting feathers in their jealousy?

I'm left with just one puzzle from today though. How on earth are the BBC going to fit six goals and two red cards into ten seconds of highlights on the Football League Show?

Posted by algordon_cafc at 8:23 PM