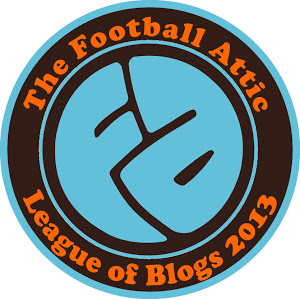 You may have heard of The Football Attic, two lads that fondly remember football how it used to be before Sky, Sepp Blatter, and Malaysian businessmen got their 'not grubby enough' hands on it.

One of the highlights last year as a football blogger was their League Of Blogs which was an opportunity for us all to amaze each other with our creative skills. A certain blogging friend of mine even stole his children's gel pens for the exercise. This eventually culminated with a sticker album and a wallchart (which still hangs proudly in our lounge) displaying all 92 entries. Well, this year it's back and claims to be bigger and better than before!

Once again we have blank Subbuteo style men to colour in, adorning both home and away kits to represent our blogs, and as a special treat we get to design a blog team badge which, in true Panini style, is depicted on a foil type background with a possibility of one day being a real life foil sticker! A boyhood dream on par with scoring the winner in the cup final. 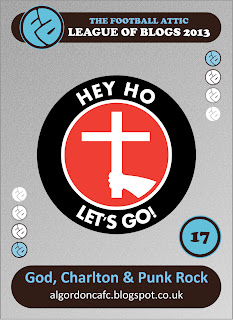 For my badge I made sure all three elements in the title got a fair showing. Obviously based on the Charlton badge, the hand proudly holds a cross rather than the sword. This particular part of the design was done by Heidi, my wife, two or three years back as a birthday surprise t-shirt for me. To give the whole thing a little punk rock feel, the loud Ramones shout of Hey Ho Let's Go! has been circled around the main badge. A great rallying cry for punk rockers everywhere, yet I think you'd agree with me a fantastic dressing room shout before running out at The Valley too.

Now last year my kits started life as coloured pencil drawings before being transformed into the 'iconic' designs they became. This year I had no intention of ruining a perfectly good formula. 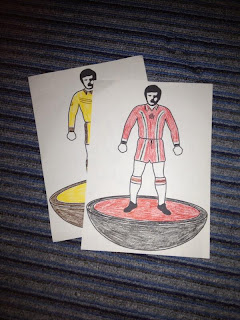 My templates for last season somehow went under the radar and weren't taken by any of the big guns in football kit manufacture. Now I could have remained undeterred and continued in my solo quest to improve sportswear as a whole, or I could sell out and rip off a tried and trusted idea. I chose the latter.

Admiral have, in my opinion, created the greatest football kits known to man, their most exceptional work came during that glorious period of the late seventies, and herein lays my inspiration. If only Charlton had worn that truly iconic (and I mean iconic in the true sense of the word this time) tramline kit. We were lucky enough to have the greatest sponsor ever in FADS, throw in an Admiral classic and I'd be drooling!

With a big 'in your face' Admiral logo setting the whole ensemble off (I love a big logo) and we have a kit that the Addicks sadly missed. Luckily I was there to save the day and still make it Charlton's.

I've saved my second team (Sutton United) too and gone amber and chocolate with my away offering, again using a classic old Admiral template.

With Admiral's four chevron chest plate boldly dominating the shirt, the shorts and socks have small Admiral logo's detailing the taping. There is absolutely no doubt that my side would look as good away from home as they would in South London.

If you write a football blog I can't urge you enough to get involved, the fun I had reverting to my childhood and creating these pieces was unmeasurable, and don't worry if your computer skills aren't adequate enough, the boys at the Attic will gladly help.

If you don't write a blog but just have a healthy interest in 'proper' football get yourself up into the Attic and read about some long since abandoned piece of football history that you'd completely forgotten about. You may even find something written by yours truly.

It just leaves me to say a big thank you to Rich and Chris for once again coming up with the idea, for letting 'erberts like myself join in with the fun, and also for the hours they have put in to make the whole project happen.

This could well become a habit and a yearly event. Perhaps we should be sending their wives a condolence card?

Posted by algordon_cafc at 8:05 PM