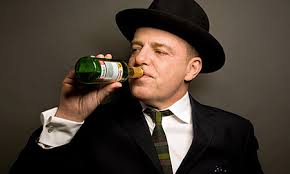 Cardiff City had become the nearly men of the Championship, synonymous with falling at the last hurdle. Tuesday evening they went one step beyond and secured promotion to the promised land, keeping in line with the hopes demands of their new businessmen owners.

A pitch invasion at the end was beamed into the homes of football fans everywhere showing how a capacity crowd were enjoying the fruits of both Malky Mackay's leadership and a bucket load of cash from Malaysia. Not that I begrudge them, promotion is a feeling second to none but if I were in that position I'm sure (easy to say when it isn't you I know) I'd be watching non league football having sent my season ticket back, therefore watching the pitch invasion of jubilant friends and colleagues on my television set with the rest of the country. As they say on twitter, #againstmodernfootball.

Charlton had arrived in Wales on the back of their greatest ever away victory, the Bluebirds were going to have to work hard for their long awaited half a century return to the top flight of English football and the chance once again to tackle fierce Welsh rivals Swansea City.

The Addicks for all their valour gave a strong performance but it was never going to be a night where the Londoners made the headlines. We can reflect on taking four points off undoubtedly the best team in this division over the two games and also take heart that, as we approach the finishing tape, we have not only had a respectable campaign but also got through it unscathed as a squad. We feared all along that Chris Solly and Dale Stephens to name but two could depart for international fame and wads of cash at such alluring places as The Boleyn and Villa Park. They stayed put, Chris Powell kept his head and we sit ninth with only three games left to go. That came round quick didn't it!

I've no idea what next season will bring but I promise you one thing, if Slater and Jimenez change our kit to blue, nickname us the Blue Peters or we become The Charlton Nike Red Bull Jets they will be receiving my season ticket recorded delivery as quickly as the Royal Mail can humanly deliver it.

As Cardiff were celebrating in Wales, just across the border at Ashton Gate, Bristol City were realizing the gravity of a situation that in all honesty had been written on the wall for a couple of months now. The Robins were the first side to fall through the basement trapdoor into League One. It's a feeling we still remember far too well and if they're not managed at all levels particularly well next season, they could be playing counterparts Rovers far quicker than they ever anticipated. You only have to look at Portsmouth and to a slightly lesser degree Scunthorpe this season to see money will be harder than ever to come by, and fans favourites on the pitch equally as hard to hold on to.

As Charlton fans enjoyed their final midweek away day of the season, I was stationed far closer to home at The Hawth theatre in Crawley to be precise. The star of the night in West Sussex was Madness frontman Suggs.

This wasn't a Madness gig or even, as has become trendy of late, a solo acoustic set. This was Suggs telling us his life story. He had turned fifty, his cat had died and he felt the urge to tour the country reflecting as he went on the rather bizarre and dysfunctional events of his childhood, the search for the truth about his father and those carefree days as a young musician. At £25 a head I'm guessing his need for a little income may too have influenced his decision to tour small town theatres!

A sell out crowd included many a familiar face. Local men that were once skinheads, soul boys, Mods and scooter boys, there was a large selection of Fred Perry polos and Adidas trainers as many of these gents still carried their youthful exuberance with style and a swagger, even if the bodies were getting larger and the hair harder to comb. I cannot really comment though as i stood there equally trapped in time resplendent in ten hole cherry red DM's, crombie and gingham check Ben Sherman shirt. Suggs himself looked just as dashing in a green check three button slimfit suit. A life in the public eye certainly hadn't increased his waistline by too much!

I hadn't too much idea of what to expect other than this you tube clip from an evening earlier on the tour. Suggs was far funnier than I imagined, his comic timing superb whilst running two or three story lines simultaneously and switching back and forth when you least expected it. Interspersed with this were tuneful interludes as he sang excerpts of a handful of well known classics accompanied by the only other person on stage, a lad in smart polo and Weller haircut, on the piano.

The jokes and the stories reminded us all of some great old days past, Suggs hinted how knowing what we do now, wished he'd given a kick to a certain cigar smoking Top Of The Pops presenter when he had the chance, yet also showed a real talent when he impersonated the great Tommy Cooper to perfection. A lot of what he said went over the head of my young wife, yet even she left knowing she had witnessed something quite special. I left finally knowing for sure that Jerry Dammers didn't call his record label '2 tone' out of reverence to his teeth.

A good night all round then, especially for those Cardiff supporters. As for the Malaysian owners however, rubbing their hands with glee at the giant money pot they've just prised open, can I just say on behalf of all football fans that value the history and heritage of their clubs, in the words of a man mourning his cat,  you're an embarrassment!