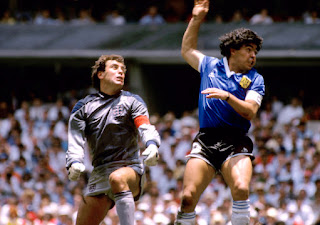 Some of the best in the world are guilty of it but in the words of Jake Burns and Stiff Little Fingers, it doesn't make it all right.

I lost count of just how many times myself and those around me in the Covered End screamed at the referee and his partners in crime for being so oblivious to this blatant flouting of the rules. We even got to give an ironic cheer as Leeds had an opportunity to claim for the same infringement late on. Handballs aside, this wasn't to be a happy anniversary for Leeds United who ten years ago this weekend had an unfortunately far too memorable victory in SE7 to the tune of 6-1. The Leeds side of today led for the moment by Charlton old boy Neil Redfearn aren't a patch on that team.

Momentum certainly favoured the home side, an historic comeback against Bolton last week followed by a gutsy draw at Brighton on Tuesday evening had let the pride and commitment of this famous club shine brightly through. Leeds on the other hand had lost their last three and only gained three points from the last six games.

Chris Powell reverted to the eleven that started (or perhaps didn't start) against Bolton a week before. Yesterday they came at Leeds from the off. Charlton had the better of the first half, great chances fell to Michael Morrison who thought he'd try his hand at rugby conversions and Callum Harriott who ran circles around a couple of defenders before unleashing a great shot from distance which whistled past the post. I felt upbeat at half time, we were on top and had shown we were capable of making that pay.

Three thousand travelling Leeds supporters had been in good voice during the first forty five. As football fans go, Leeds come in for more than their share of critics but full credit to them yesterday. With the team faltering on the pitch and very little in real terms left for them to play for, they packed the away end travelling down alongside Barnsley who were at Selhurst yesterday. The M1 services may have been interesting to the casual observer!

How quickly three thousand men in full song can be silenced. Andy Hughes, a Leeds cult hero (who didn't put a foot wrong all day) struck a well placed shot into the box which caught an outstretched Leeds leg, Charlton skipper Johnnie Jackson was there to calmly deal with the loose ball and put the hosts in front. If we continued in this vein I couldn't envisage any way back into it for Leeds.

Now let me put my hands up and admit I was the first to slate Chris Powell when he made his first substitution. With just the one goal cushion and us still looking confident enough to add to the tally he hauled off Ricardo Fuller for Salim Kerkar. Fuller really didn't want to go and looked as bemused and disgruntled as we did in the stands. I'd picked holes in the Bolton tactics last week for 'going defensive' with only a small margin, and here we were seven days later doing the same, albeit bringing on an attack minded midfielder rather than a defensive one.

Four minutes later and 'I told you so!'. Luke Varney (it would be wouldn't it) had come off the bench and equalized. There was far more than just a hint of handball in the build up yet the man in the middle who resembled an old chap on a roller coaster missed it completely. Must have been the cheese sandwiches. We'd sat back a little, invited them to bring their game forward and they had punished us. Rightly or wrongly, they were level and we had once again been the architects of our own undoing.

Slate Chris Powell's tactics at your own risk though, he still had a little joker up his dapper sleeve by the name of Jonathan Obika. Charlton had been rallying to the cause, Chris Solly being denied twice with great efforts must have wondered what more he could of done. Four minutes were added on for stoppages, Charlton pressed but must have thought they had ultimately been cheated out of all three points.

Leeds didn't enhance their reputation on the pitch when their full back went down under a collision with Kermorgant, the visitor reeling around like he'd been shot. Most of the four minutes seemed to be spent getting him off the field and it seemed an age before the referee started proceedings again. Then with just seconds left on the clock Rhoys Wiggins sent in a beautiful cross (and there was me, earlier during the game, wishing for a return from Cedric Evina) which Obika, completely unmarked, nodded home. No matter how much you thought the place erupted last week after pegging back Bolton, nothing but nothing compared to this. This was justice, this was right, this was lawful football winning through to keep us all absorbed and immersed with the beautiful game. This was OUR Charlton, the one you can't describe to anyone who doesn't understand.

Seven points in a week, top half of the table, can we now please stop all this talk of not being safe. There are so many clubs who would gladly trade places, Chris Powell under his hardest test to date has come up smelling of roses and guided us to another year of Championship football. I don't need it to be mathematically sound to state that either.

After the game I enjoyed a rare visit to Bartram's for a post match pint with a couple of faces I haven't seen for far too long (you know who you are) before setting off for home feeling upbeat and with perhaps too much of a spring in my step. Once at London Bridge i decided to try the impossible of running for a connection which was due to leave at the same time as the train I was pulling in on. Sure enough I missed it, and tumbled into a heap in the process as I lost my balance sprinting across the footbridge. It goes without saying that every single person at the busy station watched my fall from grace, my embarrassment far outweighing any pain and I darted for some dark shadows to examine my wounds. My hand was bleeding badly on each knuckle, it had taken the brunt of the impact.

To the untrained eye it looked like a hand that had been hit by a fast moving football on the build up to an illegal Leeds goal.

Posted by algordon_cafc at 6:59 PM