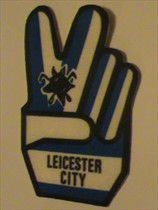 Hands up who didn't fancy today. Who else would have quite happily taken a point before kick off? With warm sunshine indulging South London there was absolutely no opportunity of using the same excuse as last week, it just wouldn't wash again no matter how many sprinklers we had on the pitch before kick off. it's quite demoralizing how little faith we now have.

I thought we'd be on the end of a real pasting, Leicester, once again, are a useful side put together with a tidy amount of cash and a wage bill to match, which I may add is always paid in full and on time. A quality team that has all the attributes to make the transgression to the big time. And how we wish we could play them every week!

Our defending has of course become infamous throughout the division and Leicester brought a fair number with them to witness a goal fest in the capital. Chris Powell, well aware of his rear guards reputation, has understood the need to address this and decided that if two centre halves don't cut the mustard then simply add a third. A ploy he used in Huddersfield midweek which worked well for eighty minutes. This dimension does require full backs that are prepared to run the flanks all game, today in Wilson and Wiggins (my man of the match) he had just that. Chris Solly apparently is out with a niggly knee and not in the final throws of signing a ludicrous deal with a club that can further his career. He'd better get his skates on then, the transfer window closes on Monday and we've the gas and electric to pay.

Jackson drove the troops from the middle admirably alongside Pritchard and Stephens while Simon Church led the line alongside penalty expert Yann Kermorgant. The script once again would write itself.

We showed little enterprise I'm afraid from open play, the final ball always falling a short yet from set pieces we looked solid. Corners, free kicks, the smell of a goal was always in the air when the referee gave the vital decision our way. Now Michael Morrison has come in for some severe criticism this season already, not least from myself, and in all honesty I thought it may do him good to be dropped. True to form then he scored the opener with his head from a corner just before the half hour.

To lead at half time was a good achievement. The tackling was very impressive, strong and decisive although possibly needed a little too frequently as we struggled at times to keep possession, especially when clearing the ball from our area. Leon Cort saw the ball return quicker than he could keep up with as his long clearances rarely found a red shirt. We continued to press strongly though and the second half merited a superb performance from Kasper Schmeichel in the Leicester goal.

There were at least three occasions where the keeper pulled off saves straight from his fathers locker. The first, very impressive as he got across his goal line to turn a Kermorgant free kick around the post. Kermorgant won the free kick himself, plummeting to the ground where there appeared to be absolutely no contact from any opposition player. Neatly done and a trick Simon Church would try to emulate later in the box with less success. The second save was far more elaborate as a one handed stop denied a Kermorgant header and the third a brave one on one with substitute Jordan Cousins.

Kermorgant did get Charlton a second, again from a corner although Leicester protested for pushing with no success. The fact we had doubled our lead was relatively surprising as the referee had tried his best to level the odds by sending off a Leicester midfielder, Matty James, for a rather too verbal outburst. Very little dampens my enjoyment than the opposition being reduced in numbers as it has so often been our undoing.

Any new found confidence developed by our defence was soon shattered as the visitors duly pulled one back. A loose ball in our area was captured quickly by a blue shirt, the lad had a little space and slotted home. You didn't think for one moment that it would all be plain sailing did you? On the plus side the Charlton safeguard took two steps forward today to their one backwards which is undoubtedly a huge improvement.

A first victory could have been far greater if it wasn't for superb goalkeeping and a missed first half sitter, yet in true Charlton form we made it a nervy six minutes of stoppage time. But a first three points it is, and a real victory as opposed to last weeks mental achievement.

It was worth celebrating so we headed to The Grapes at London Bridge. Unfortunately so did Stoke who had been at West Ham this afternoon. A small mob arrived at first, young spotters followed by bigger and uglier lads and a police entourage. These weren't the Met either so had come down to London for day out too. As we supped our beers more appeared, wave after wave of Stone Island clad brutes arrived, there were police wagons parked all around and there was no doubt that something nasty was brewing. Too old for such fisticuffs we downed said beers and found a much quieter watering hole. It was an evening of celebration after all, not confrontation.

As a footnote today also saw a new Charlton fanzine hit the streets called Valley Talk. The brainchild of a very enthusiastic Joe Hall, this debut issue is proving to be an enjoyable read of many well known Charlton writers. Keep an eye out for future issues, as great as it is to have the Voice return, you can't beat a little competition.