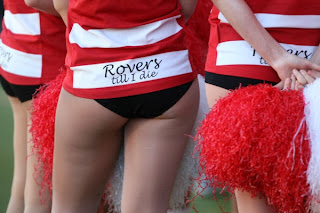 Some football matches will remain with us for years and years to come, big wins, spirited comebacks and haunting defeats. A game that never was though, that will be etched permanently in our heads even if the record books refuse to acknowledge it, a story that will pass down through families for generations, told by future grandparents that currently still go to school.

An abysmal pitch matched by equally atrocious defending saw Doncaster Rovers three goals up after twenty three minutes. A surface that refused to allow the ball to roll saw football of comical proportions, unfortunately all at our expense. Indeed, their were two teams out there but the north end of the pitch, which we were defending certainly seemed the more waterlogged. When the third goal went in we couldn't take any more, the game had the makings of a record breaking home defeat and we headed for an extremely premature half time beer. Five minutes later we were joined by the masses as the referee suspended proceedings. Tucked away in the upper North concourse we watched events unfold on the TV screen although without subtitles it was anyone's guess what was happening. I'm not sure anybody in the ground had any clearer an idea than us either.

The obvious decision would be to abandon the match, and if the scores had been level I've no doubt the referee would have done that immediately. With the visitors three goals up I had a niggling feeling he'd bottle it. I agree, in the olden days they played in mud baths, and pulling their socks up they dug in and got on with it. In the modern era of health and safety, not to mention the modern game based primarily on a fluid passing initiative, this match needed to end. It was farcical. We had threatened at times, their keeper had produced three good saves, but we were guaranteed to come out of this as villains and deplorable 'bad sports'.

Conversation on the concourse seemed to focus on the away support. Charlton seems an easy place to come these days, many away fans say it's one of their favourite grounds to visit. Probably because they're made to feel so welcome. We give them the stand with the best acoustics and relative comfort. There is absolutely nothing hostile to worry a visiting supporter, not even a drop of rain. Take the roof off, that will quieten them down, or better still give us the Jimmy Seed stand where we can sing our hearts out (remember how loud Palace were last season) and give the away fans a couple of blocks of the lower West. The upper class above them could even hurl prawns down on the unsuspecting travelers from their sandwiches.

After much forking, sweeping and rolling from both the ground staff and desperate Rovers players, the pitch remained unplayable. The officials duly lived up to my initial fears and brought the teams back out. Simon Church pulled a goal back whilst Paul Keegan made two rash challenges within eight minutes to get his marching orders. Momentum was definitely with us, attacking the goal in front of the North stand would certainly have given us opportunity to claw back the deficit in the second half, which by my calculations would have finished around six o'clock!

Fortunately though the half time whistle became the final curtain and the match was finally abandoned. perhaps the ref thought it fairer now that we had the impetus. We cheered, Donny mourned, we would do this again one Tuesday evening and starting on level terms. We were lucky, pray the defence train and work a little harder before the re-match!

I remember years ago arriving at The Valley for a West Ham match by motorcycle, absolutely drenched as it rained cats and dogs for the entire journey, only to get straight back on the bike as the game was called off a half hour before kick off. That should have happened yesterday, we would stand in a better light, even the awful Football League Show on the BBC portrayed us, perhaps unintentionally, as swindlers and sharks. The one true rapscallion got away without blame. He sent the rain, not us.

From our encounters with a group of easily agitated Donny supporters both at Charlton station then again on arrival at London Bridge, I think it's fair to say they weren't best pleased with the situation. We may well have overtaken Rotherham as the most despised team in Doncaster. Twitter as usual has lived up to it's very low standards and confirmed this.

Today has been much kinder, after an early morning downpour the weather remained sunny and dry for a pleasant scooter ride to Brighton as Mods up and down the land converged on the seaside resort for some Bank Holiday fun. Sitting on the pier enjoying an ice cream it was hard to imagine the two days were from the same weekend. It's one I won't forget.

Posted by algordon_cafc at 5:10 PM