The Capital One at the John Smith's 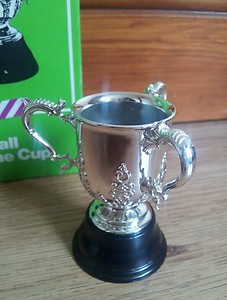 Sponsorship, loads of money thrown at events and places (amongst other things) that already exist in an attempt to get your name 'out there' and on the tip of every tongue. It's big business, plenty of smaller fish depend on it. I see it's need but it still bugs me. The League Cup is thought of as a pretty meaningless competition by the big boys, and everyone else once they've been knocked out of it, Capital One can throw thousands at it, I still very much doubt I will ever use one of their services.

Huddersfield's ground is now known as the John Smith's stadium. I can't even begin to think how much money would be needed to make me drink that horrible bath water of a beer. The brand name is owned by Heineken, just as awful. Money well spent all round then. Yet when it was called the Milk Cup, now that's a product I'm very keen on........

Once we'd gotten past the branding we realise this is most certainly not the tie of the round as Huddersfield entertain Charlton in knock out football. Again. How we groaned in South London when the draw was made, and how they groaned in West Yorkshire also. It was going to be tough to get the home supporters interested let alone those travelling from SE7. In the end the number in the visitors section numbered 159 and I tip my hat to each and every one of them. Imagine going that distance on a Tuesday to watch Charlton in a cup match, we've all seen villains in the movies torturing poor unsuspecting souls with pliers, flame throwers and other implements of mutilation. Even Hollywood script writers aren't cruel enough to endure a Charlton cup tie on them.

Tonight it sounded from the commentary and from the tweets of those there (yes Spanish, I mean you) that Charlton for once looked good despite ultimately getting knocked out of the competition. The opinion seems to be that the result was a little harsh and the better side lost.

Chris Powell opted for a different formation, three centre halves and Evina and Wilson as wing backs. Jackson was back in the middle and Sordell started up front with Piggott. Huddersfield put out a strong eleven not to dissimilar to a team they would field for a league match.

Twice Charlton led, first from a Dale Stephens strike, then a goal for the immensely irritating Sordell. All strikers need a goal for confidence and getting off the mark is important when joining a club, but I fear as we continue to watch him he will persist in provoking and inciting us with a lack of effort, interest, and results. Perhaps I'm harsh, I'll quite happily eat my words if proved wrong.

Can we complain if we've scored two goals away from home? I suppose we can a little if we've conceded three. At the moment we are shipping goals at a rate of knots. Leaking boats sink. Teams that concede lots lose, I've no more low quality nautical analogies left after Saturday I'm afraid, but suffice to say our defending remains a worry.

For now though at this late hour I shall sleep content in the knowledge that we can concentrate on more important issues than a two bit cup that nobody has any real interest in. Except for Peterborough and Bristol City possibly.