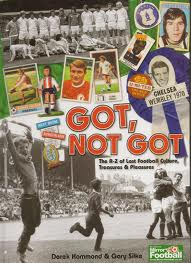 In our bathroom, within reaching distance of Armitage Shanks, is a shelf. I put this shelf up for a reason, you see I'm a firm believer in a little light reading whilst doing what nature calls you to do. My metabolism works well, so if I'm in that room regularly i may as well have some creature comforts.

The main contents on the shelf are old copies of Backpass and When Saturday Comes magazines. There are a few books of course, a Far Side collection of cartoons for one, the kind of thing you would expect to find, plus a paperback version of the new testament for the odd spiritual moment. This is probably the only one my wife ever picks up.

Got, Not Got will end up there i expect but is far too good to reside on that shelf  at this early stage. For the moment this is coffee table material.
My birthday was only a few weeks ago and, as normal, the family asked if there was anything i particularly wanted. I am notoriously very difficult to buy for, there's little i want or need and that which i do desire is normally far too expensive for a gift. Therefore, if i want something i buy it myself.
Then i remembered Got, Not Got. A title we all uttered in the playground while looking through a classmates huge stack of swaps. How many were the foil club crests worth again? Depended on the rarity of the players they were being swapped for i guess but I'm sure there was an unwritten rule of two.
I had been reliably informed by Keith a talented photographer friend on twitter that this was not only a great read, but also a wonderful journey back into our childhoods, a time when football wasn't polluted by sponsorship, show business, rich continental tycoons and squads of players built from more countries than you can shake a very big stick at.
This was back to the good old days of football. Mud, short shorts, bubblegum cards, more mud and footballers sporting perms on Top Of The Pops.

Written by Derek Hammond and Gary Silke, established journalists and Leicester City fans, it's an alphabetical journey through the 60's, 70's and 80's calling at just about every club along the way. All teams get around half a page of an amusing snippet of kit history, a little memory of a cup run or just about anything in between. Not surprisingly Charlton's exile is mentioned alongside photos of an overgrown Valley.

Every piece though is superbly written with great humour and you really get a sense of the joy (or irritation) some of these things gave to the authors. Remember Subbuteo supporters? You carefully painted them ( i think later ones came painted) then filled your grandstand to a near capacity. This was inevitably followed by disaster.
"Legs-crossed man was always a liability, falling over sideways at the slightest bump or breeze and taking half a block of fans with him."
Yes, yes he did and how i used to begrudgingly sit them all upright again only to go through the same rigmarole five minutes later.

Other gems include psychedelic programme covers, Admiral sportswear, Saint & Greavsie, and Jossy's Giants. It's all in here in glossy colour photographs, bound in a hardback cover it would sit nicely amongst your old Match and Beano annuals.
Got, Not Got is that kind of book, pick it up open it at any page and read. A little like i used to do as a kid with my Panini sticker albums. I always had my head in them in the late seventies, early eighties and was able, at the time, to recite the age, height and weight of such stars as Clive Whitehead, Mel Eves and Micky Hazard.

It would have been easy to just produce a book of nostalgic memorabilia. It's something else to have a book that captures the heart and soul of the time. I didn't just look back fondly, i had flashbacks full of excitement!
If you're of a certain age you need to get Got,Not Got if you've not already got it. If you're not of that age it's worth getting for your dad and borrowing it. Then ask him if he's still got any of the items you've just read about, they're probably worth a fortune now!