'I Was A Teenage Armchair Honved Fan' 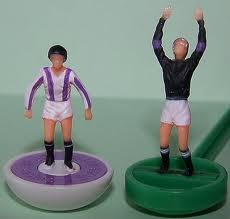 Actually it wasn't Honved but another side from Budapest, Ujpest Dozsa. Resplendent in their purple and white stripes they were responsible for many a childhood imaginary team, not to mention frequent winners of my Subbuteo European Cup.
It was of course a knockout competition in those days, the dreadful Champions league still a pipe dream at best.
Half Man Half Biscuit had different allegiances from me and the title is borrowed from their song, so Honved had to stay. They also wrote a song with plenty of Subbuteo references, although rather than Honved, it was Dukla Prague who saw fame in England through that one.

Of course other sides did win my coveted European cup, a trophy which stood as high as at least three of the little players that won it. Another winner was Wisla Krakow from Poland, a club I still strongly support. A couple of years ago we went to Krakow for a long weekend but the team were playing away. The wife would never have allowed me to go anyway but that's beside the point, I got to see their stadium. It's on my bucket list, and one day I'll witness the atmosphere!

From Scotland there is Brechin City, unfortunate in often being losing semi finalists along with Ireland's Shamrock Rovers and Belgium's Lokeren. Then of course there are the mighty Borussia Monchengladbach. In the late seventies they were the Hungarians main challenge for the silver wear.
For English contenders we had the Addicks of course plus Liverpool, a club I kind of supported as a kid. This had nothing to do with their actual success on the field, it was simply that my favourite player Emlyn Hughes was at the heart of their defense.

I was fortunate to have a fair bit of kit and plenty of different sides to choose from, some of them still even had eleven players! I started with a world cup edition, which came with the standard red and blue sides (the reds sorted Charlton and Brechin for me), plus Brazil. Their little legs and faces were painted brown which as young kid I thought was cool. One Brazilian player had his kit and base painted into red and white as Charlton invested in this international superstar!

There was included in this grand edition a scoreboard with just about most the teams you could wish for printed on thin strips of paper. Ujpest Dozsa though was handwritten, by my grandad I believe, on the reverse of somebody else guaranteeing never a meet between the two.
Green fencing surrounded the playing surface with small brown fence posts connecting the panels together. These posts had small holes so you could nail it all in place on a board should you wish. Upon erecting this fencing it soon became apparent I hadn't left enough room for the goalkeepers 'tail' and the architects were called in to make some last minute alterations.

Behind the fencing a large brown and green (the late 70's early 80's Subbuteo certainly had a colour theme going on) grandstand and a corner of uncovered terracing. Joining the two, a straight piece of uncovered terracing meaning from the half way line to the corner it looked impressive. Two clear dugouts, a TV tower and four floodlights (with working batteries) had to try and fill the rest.
For the supporters it was very much like the east terrace at The Valley in the early eighties. I had the twenty five plastic fans the grandstand came with plus maybe one or two more packets of five or ten, I forget, to fill that vast space.
Considering the space each fan had around him it was still a very unsafe environment as my elbow frequently clipped a stand and they all fell forward a few rows. The straight piece of terracing had a tendency to collapse completely although this rarely caused a game to be abandoned. Well, we were all a little tougher and less politically correct in those days.

Never a game went past without at least one player trying to re-enact 'Escape To Victory'. A death defying leap from the table, normally directly after taking a free kick, and the daring little lad was off.
Never fear, they never actually got away. In fact it was like Auschwitz for escaping. No sooner were they fleeing than a large foot came down on them snapping them clean away from their playing base. Similar in many ways to being shot in the back by Germans less than a hundred yards into freedom. The odd couple that stayed on the run for longer would still come to regret their actions once faced with my mum and her hoover.
Looking back I wonder if they were just trying to escape a very scary corner kicker who was a giant of a man, although still probably shorter than the trophy they were competing for. Or maybe it was a rogue player from 'Striker' with that bizarre head you pushed down to kick the ball that put the frighteners on them. It freaked me a little bit!

If I fancied a change of playing surface I would move down from the dining room table to the deep shag of the lounge carpet. The playing surface down there it gave the feel of a boggy Wednesday night pitch at Hereford. Those little players struggled to kick the ball further than about six inches (although in fairness, if put to scale that's still hoofing it up field). If my mum had ironed creases into my pitch it would be even less as the ball would roll uphill then back down again just as it reached a crease my school trousers would have been proud of.

Whatever the playing surface, the tactics would remain the same. Start with a four four two, or some other trusted formation, then end up with all ten outfield players in the opposition penalty area. This gave rise to an American tradition of the time out, a minute to go back to some kind of order on the field of play.

I was very good at playing Subbuteo on my own. My brother, my dad, my grandad and a couple of friends from school would play from time to time but I needed Subbuteo more often than that.
If I was at a crucial stage of the competition I could quite happily spend my day at school day dreaming about that afternoons match. Controlling both sides I guess you could have claimed some kind of match fixing scandal, but I was only nine and still far too innocent to even be aware such things took place.

Some clubs were figments of my imagination although this was very much in my early days of table football. I even remember a team from Tracy Island (I think it may have been Manchester City I used, similar shade of blue you see) competing in one match. The likes of Orient in their 'braces' kit were always going to be too strong for a bunch of part time world savers. Imagination was as important as skill to a young aspiring footballing God.

This wasn't just the beautiful game, it was my beautiful game and complemented all my Panini sticker albums perfectly. Life was so different then. A beer and a sing song with the lads is great, but those days of being a football fanatic as a kid are fondly remembered as some of the greatest.

When I go to heaven I hope there's a Subbuteo set there.
Posted by algordon_cafc at 7:23 PM