Warming up for love 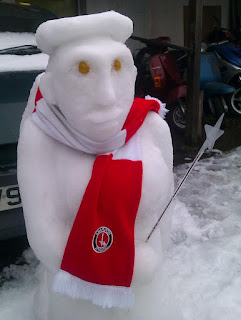 Valentines Day saw a return to action for the Addicks after another enforced Saturday afternoon off, due to last Saturday's trip to Chesterfield going the same way as the Rochdale fixture the week before. With overnight temperatures dropping to -10 it was of very little surprise that it was postponed, just very disappointing for those who had already started their journey.
Some made the most of the day and visited a few of the ale houses in Chesterfield whilst others mixed with Birmingham City and Wycombe Wanderers fans at Bramall Lane for the Chairboys League One clash with the Blades. There is a video on you tube of a little singing banter between the three during half time.
We can now emphasise with the Rochdale fans who were looking forward to a day out in the capital last week. I doubt very much they'll bring as many down for a Tuesday evening fixture next week.

The cold snap is over and our Charlton snow angel has all but melted away. My hands, which spend all day covered in old engine oil, are starting to heal a little as the skin cracks in freezing temperatures, and most importantly of all, football up and down the country is being played. Yes, things have certainly cheered up!

Last night saw the first of four consecutive Tuesday night fixtures.The next few weeks are going to be vital in the promotion challenge, a real make or break time for all the clubs involved.
No better time to secure another three points then with a win over Britain's least favourite club, The Milton Keynes Franchise.
A small crowd was a foregone conclusion what with it being Valentines day, but those allowed a pass out, along with all the single supporters witnessed, from what I'm told, a relatively unspectacular match with a few flash points.
I spent the entire match in a Chinese restaurant close to home with my wife and didn't once look at my phone to see how we were getting on. I am that dedicated to/scared of (delete as you wish) her indoors!

So what of this match? Two minutes after walking through my front door i was scanning the web for reviews.
Yann Kermorgant received a head butt resulting in a penalty two minutes before the break! The Frenchman's a pretty big chap, i wouldn't head butt him, but Gary MacKenzie, the culprit, is a big lad himself. I'll be keen to see what went on there. It'd take a brave man to step in between those two.

Johnnie Jackson, skipper supreme, stepped up and duly slotted away the resulting spot kick and we were going into the interval with our noses just in front.
This was only two minutes before the end of the half,  yet there was still time to add to this as Jackson was tripped inside the box moments after Green had rattled the crossbar in the third minute of stoppage time. Again Jackson dispatched the penalty kick. Half time 2-0 up against ten men, it had all the makings of a classic Charlton collapse. We held on though.
In fact it could have been a lot different had Hamer not made a tremendous point blank save just after the half hour.

It doesn't sound like you would have known which side were playing with ten men in the second half as MK Franchise put in a spirited shift in trying to overcome the deficit. They did pull one back three minutes from time but Charlton hung on to go eight points clear at the top.
Sheffield United beat Huddersfield in another top of the table clash (resulting in manager Lee Clark losing his job) whilst Sheffield Wednesday dropped points at home to the surprise package of the season, Stevenage. It's jolly nice of that massive club to try and stay in this division so the likes of Yeovil and Wycombe have something to aspire to and the opportunity of a day out at one of the worlds biggest clubs. They really are too good to us all.

Charlton took advantage of this great position by sending out season ticket application packs last week. Looking through old ticket books i realise i haven't had a season ticket since the 2003-2004 season when my job situation changed and i had to work Saturdays.
I'm keen to change this and make more than the one game a month which i do on average at the moment. I'm in discussion with work on trying to come to an arrangement but that's the easy part. I then have to persuade the wife! I can understand Heidi's point of view, i work around fifty hours each week and we hardly spend any time together. We'll see what happens. I've left the application pack on the kitchen table, it's been there a few days. She knows it's there, she knows that i know that she knows it's there. It's all a matter of mentioning it, or more importantly the timing of my mentioning it. Now you see why i didn't look at my phone to check the score during last night's very romantic meal...................

Tranmere Rovers on the Wirral Saturday, then the re-arranged Rochdale match at The Valley on Tuesday. I've booked a rare afternoon off for that one, it'll be my first midweek game since a trip to the MK Franchise back in late September. Can't wait.

Posted by algordon_cafc at 1:57 PM