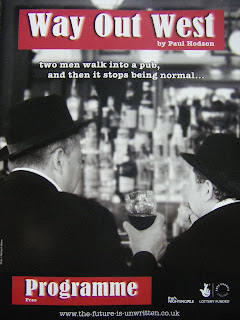 Freezing temperatures have caused havoc with our sporting weekend. A Saturday afternoon at The Valley to watch Charlton entertain Rochdale has fallen by the wayside and left me with a free afternoon, a rarity in itself.

My wife, knowing I'd be out, has made plans with one of her girlfriends and I'm sat here home alone. I got to thinking how I'd been looking forward to the football, a light at the end of the tunnel. You know the scenario, a long week at work made even harder by the plummeting temperatures, the thought of a few beers with mates and football to keep your morale up during these unforgiving times. To get so close, just to have that hope taken from you on the home straight. What an awful week. Or was it?
On reflection I was, perhaps, a little over dramatic. If you're going to dramatise something, do it properly.
Paul Hodson did, and I witnessed it Wednesday evening.

Crawley, like most towns, has a thriving theatre which i really should visit far more often than i do. The main stage is on par, if not better, than most although sometimes the quieter, more intimate feel of a smaller setting adds to the evening. The Hawth has this second stage called The Studio with just under one hundred and fifty seats.
Wednesday evening it was here that myself, Heidi and one of her friends watched a small production, Way Out West. Yes, as in Laurel and Hardy. Our little group helped swell the audience to around fifty. Like i said, intimate.

The lights dimmed and two men, Harry (Mike Goodenough) and Sam (Damien Lynch) appeared on the stage. Their was no-one else throughout the whole production nor the use of any props. These boys even mimed the pint glasses they were holding. The only 'prop' of such was a tape playing public house background noise throughout.

At the beginning these two strangers have walked into the pub for arranged meetings with, in one case a friend and in the other a blind date, both were stood up and so they got to talking. Do they know each other? Harry is certain he's met Sam before and so the journey begins. The conversation goes from Northampton to Hollywood, from the big bang theory to Internet dating. It's all delivered with great humour. Not the side splitting slapstick type of comedy but a gentler well written kind that required great skill and timing from the actors.

Neither man is happy, not where it matters, deep down. The fact they have a passing resemblance to Stan and Ollie is certainly not by coincidence for it may well be past cinema experience of Way Out West where they did actually meet once before.
The subject of reincarnation rears its head. Could they really be.............. No of course not, those comedy greats were still alive when these two were born.

These two strangers certainly share something and it's not just a suicidal tendency. A love of Laurel and Hardy and the unashamed freedom of dancing in front of drinkers at kicking out time. A truly superb rendition of 'that' dance from the original film to finish on meant that not only had these two ,until recently, strangers become best of friends, but they had made fifty more that night.

Keep an eye out for 'The Future Is Unwritten' theatre company. In the programme it says they are 'powered by punk values of honesty, integrity, inclusion and the spirit of do it yourself invention. The company creates work that explores issues of popular culture, politics, spirituality, responsibility, injustice and respect.'
Sounds like they've got it all covered then! During April and May they will be touring their version of Fever Pitch. I'm almost, only almost, tempted to borrow an Arsenal scarf to wear to it.

Posted by algordon_cafc at 4:06 PM