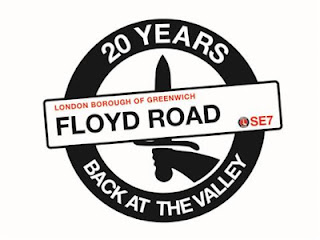 Big games come and go, yet milestones arrive with a deserved fanfare and live long in local folklore. I am old enough to remember December 5th 1992 quite clearly, many who were young children then (or even not born at all) will feel like they were there, such was the enormity of the day and the achievement.

Years of exile finally over, nomadic Charlton were back in SE7, the blood sweat and tears had paid off. Move on twenty years and the corresponding weekend of the season saw another club with a migratory history rather fittingly, Brighton and Hove Albion visit The Valley to join in with our self indulgent (and quite rightly so) party atmosphere.

Before the kick off and before my arrival, former Charlton greats were introduced on the pitch amidst a bevy of red and white balloons, the club produced another bumper edition and one day collectable(?) matchday magazine (formally known as a programme), the carnival may not have been in town in body but the significance of that day wasn't lost on a soul.
Brighton to their credit showed us some respect, also parading former greats and wearing their blue and white striped shirts which of course don't clash rather than following suit with modern football and wearing an away strip regardless.

A very fine touch, the brainchild of a good friend and fellow blogger Hungry Ted was a spontaneous round of applause at seven minutes past three, the time of the goal from twenty years before, followed by a rousing rendition (still sung far too quickly though) of Valley Floyd Road. I could see Chris Powell in his technical area happily clapping along but it was a tad harder to see if he joined the covered end choir for the anthem.

December, being not only the finale to the the year but also a rather special month in the Christian calendar is always a hectic time for me, blogging plays second fiddle to just about everything else. Hence we had played twice since my last posting, a rather uninspiring win at home to Peterborough and an electric, if slightly undeserved, point at arch rivals Millwall.
The Seagulls were in South London for the second week running and were on the back of a defeat at Selhurst Park. That would have hurt them greatly and consequently seen Charlton as fair game to both turn their fortunes around whilst raining, if not pouring on our parade.

The most noticeable absence from the starting eleven was Leon Cort. Dervite and Morrison were flanked by Solly and Wilson. Kermorgant was on the bench allowing Haynes to partner Hulse up front. My preferred pairing i'm afraid all you Yann lovers!

We survived the 3.07 applause, conceding then didn't bear thinking about,  and five minutes later the home side embraced the fairytale scenario with aplomb. Lawrie Wilson nodded home from a Dale Stephens cross sending the 16,000 Charlton fans into hysteria. This was almost too good to be true.

Brighton had packed the Jimmy Seed stand and just before the half hour mark they erupted as the dangerous Craig Mackail-Smith pounced on an awful (but thankfully rare) Michael Morrison mistake. All level at the break, even if the visitors had the luxury of an extra man in the official. I'm not normally one to get on the back of the referee, it's a job i don't envy, but Mr Sheldrake had an abysmal day at 'the office'. Far too keen to play an 'advantage' when it wasn't always just that, yet happy to blow up every time it benefited the visitors.

Charlton again got their noses in front during the second half. A sublime ball from Dale Stephens to Hulse, in turn setting Jackson up on the left hand side of the box, wrong footed the entire Brighton team. The skipper played it in to Bradley Pritchard who scuffed and stumbled his way over the ball before finding a path for it goal bound. His first goal at The Valley and you could see how much it meant to him as he hung back in front of the north stand and punched the air for all of us.

The delirium was short lived though as Morrison again was the culprit, allegedly upending Ashley Barnes right on the edge of the box. Yann Kermorgant came on before the free kick was taken, i noted to Jim next to me that it was no different a platform to that cardinal sin of making a substitution whilst defending a corner. The change of personnel, the 'dubious' (well from my view anyway) decision in the first place, this ball was going into the net. LuaLua stepped up and used the Charlton wall to his full advantage deflecting the ball past a hapless Ben Hamer. LuaLua somersaulted his way across the pitch in spectacular, if not a little dated, fashion.

Brighton sensed the win was there for the taking and although both sides had chances to snatch the victory it was a relief when the final whistle was blown. It was a good spectacle to watch and a point was a fair return.

With three thousand Brighton supporters expecting to catch the same train as us, we decided to have a post match beer at the Rose of Denmark rather than one of the usual  London Bridge haunts. The quieter train a little later was, however, nothing of the sort. A Brighton 'firm' had decided to hang around SE7 and then join me on my journey back. Not having had enough 'action' last week against Palace obviously, they wanted some more and were desperately trying to arrange another meet. I figured rather than join in with their anti Palace songs i was better off reclining in my anonymity, London Bridge station couldn't come quick enough! A very small minority of course and nothing like the Brighton fans i chatted to on my way to the game drinking their Marks and Spencer Belgian lager. A different class.

Two away days follow, no more home games until Boxing Day. I said a month or two back that we'd be top half by Christmas. We are now.

Posted by algordon_cafc at 8:37 PM