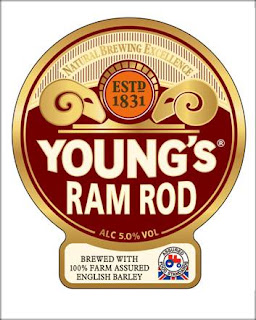 It's a lovely bottled beer from the Young's brewery, mixing with their Special bitter perfectly. It's also an instrument for cleaning the barrel of a firearm, a little more poignant then for Chris Powell who, if speculation is to be believed, is staring down the said barrel as a string of poor results and performances could be numbering his days. Certainly one of his biggest struggles, the art of the substitution, was at the forefront of every conversation around SE7 last night after his teams draw with the Rams.

With the frenzied activities of Christmas and it's extensive run up, it had felt like forever since i'd made a pilgrimage to The Valley. The ladies on the densely populated train towards London Bridge tried their hardest to delay my return even longer by constructing an obstacle course of pushchairs for me to negotiate, never has it taken me so long to depart from a carriage. All of this came after a slight worry that we had broken down as we sat for ten minutes rather ironically outside the monstrous Sehurst train depot. Relentlessly i battled on and made my way to the Rose of Denmark and still in time for a pre match glass of ale and the chance to meet the lads to discuss our Christmases.

The threat of torrential rain and a possible postponement remained (before kick off at least) just that. The game was on and with it the chance to put an end to an unwelcome losing streak. Derby were the visitors, their supporters came equipped with a rather large flag and their players kitted out thankfully in the traditional white shirts. You'll be more than aware of my disgust for the unnecessary use of away kits.

The term 'a great game for the neutrals' is one of those overused football cliches far more suited to Match of the Day than the pages of my blog, but i have to say, this game really was a good spectacle. Solid passing football from the visitors, a wonder goal, a dubious ref giving an equally dubious penalty decision and a subsequent sending off, a final rally and a glaring miss worthy of every football blunders dvd. We may not have had the quantity of goals flying in around the grounds of the Premier League but we certainly had the drama.

Derby were certainly quicker 'out of the blocks' (to boldly steal another MOTD cliche), although they were stunned into silence as Danny Haynes scored a screamer of a goal (possibly THE goal of the season) after some equally good solo work around the edge of the box. He would unfortunately pull up a little later clutching his hamstring. I'm guessing that's about six weeks out as a minimum which is a real shame, Haynes has been a shining light in our side this year.

Chris Powell seemed to still favour the late substitution, it felt like we played for four or so minutes waiting for Bradley Wright-Phillips to replace Haynes during which time Hamer made a superb save as a Derby shirt broke clean through. One of many great saves from our number one, you may believe we threw two points away yesterday, some may say Hamer earned us a point with his man of the match display. If Haynes goal was special, Hamer's double save in the second half was equally breathtaking.

And so we get to Michael Morrison. Should he have played the second forty five in the first place? After a booking and two separate stern words from the match official during the first half, many managers would have hauled him off. I agree you can't change a centre half every time he gets booked, but Morrison yesterday was still struggling to get on top of his game and the more than capable Dorian Dervite was on the bench fully fit and ready. Many of us felt he wouldn't make the full ninety long before the penalty incident. I cannot believe Nigel Clough didn't make our defender a prime topic during his half time team talk urging his players to wind him up and draw a rash challenge out of him.

Previous to the penalty incident Bradley Pritchard had every chance to seal the points for Charlton. We saw how much his goal meant to him against Brighton, yet he couldn't hide his face quick enough after hitting the bar from point blank range, and this was after having a moment to steady himself  and eye up the target. I would like to quash any rumours that my orange cagoule was in some way to blame, dazzling the midfielder from the upper reaches of the North stand.

Charlton's ten men rallied on the counter and dug deep for the final fifteen minutes as Derby sensed all three points were up for grabs but in all honesty we left for home feeling we threw it away, albeit with the help of the man in the yellow jersey. After three defeats in a row we've finally managed to put another point on the board although we have seen December come and go without a victory. They may not have done enough to secure that elusive victory yesterday but they may just have done enough to keep the gaffer in charge for the start of 2013.

I'm feeling strangely confident for Tuesday. Watford look good and Vicarage Road is a tough ground to get a result but i feel we are overdue a slice of luck. I do foresee regular use both home and away of the 4-5-1 formation as Rob Hulse sees his loan expire on Tuesday. This will leave only Kermorgant and the slightly fragile Fuller up front if Wright-Phillips does, as expected, move on during the transfer window.

If goals are going to be harder to come by, then we'll need the likes of Pritchard to be far more composed when the opportunity arises!
Posted by algordon_cafc at 7:27 PM