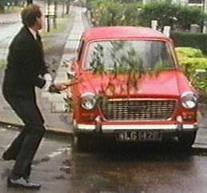 Same old, same old, said twitter, all afternoon and well into the evening. Charlton's reputation for throwing a perfectly good situation out with the bath water is common knowledge. To repeat the feat two weeks running almost replicating the fine detail is quite simply astonishing/disheartening, even for our normally tolerant faithful.

Sheffield Wednesday came along and mugged us last Saturday, Crystal Palace did the same yesterday. Tactical substitutions failed us one week and they ruined us the next. Ian Holloway may have been under fire of late from the Palace supporters but he certainly won a place in their affections with his half time team talk and change of formation. Powell was certainly the sharper dressed of the two (Holloway looking more suited to selling the Big Issue outside Sainsbury's) but the Eagles boss was a lot sharper tactically.

The first half was a showroom for Charlton's dominance, first to every ball whilst keeping the talents of wide men Zaha and Bolasie at bay. With Dervite playing a holding role in front of the back four as part of a five man midfield Charlton bossed the middle of the park, Solly and Wilson overlapping wonderfully on the right hand side causing all manner of mischief.

It was the lone front man, Ricardo Fuller, who broke the deadlock after a quarter of an hour. Typical fancy footwork from the striker (football's answer to Lionel Blair?) saw him dance his way in from the side of the box finishing with a low strike which rippled the net from an acute angle. Three thousand travelling spectators who were already in good voice erupted, revenge for September's undeserved defeat in the reverse fixture the ultimate goal.

As with the Wednesday game, Charlton failed to turn pressure and possession into anything more. The best opportunity to double the lead and perhaps kill the game off falling to Johnnie Jackson. Cedric Evina put a lovely cross in from the left picking out Lawrie Wilson who headed neatly into the path of the incoming skipper. Jackson, normally deadly with his head, this time guided it the wrong side of the post and the only thing rippling the net this time was the player himself.

At half time Powell was looking relatively happy, Holloway was trying to ignore the disapproval of many, vented his way. When they came back out fifteen minutes later Kevin Phillips was stripped and ready to join the action. After a spot of googling, it transpires the Palace debutant is somewhat surprisingly the youngest of the three of them.

Phillips linked well with decisive front man Glenn Murray up front as Palace ditched their 4-3-3 for a far more effectual 4-4-2. Phillips was the centre of everything looking a lot more dangerous than he did a month earlier for Blackpool at The Valley. A game of two halves is probably the most overused phrase in football but sometimes no other words will do. Crystal Palace were on top, the Addicks needed inspiration, cue the first of Chris Powell's changes a whole seventeen minutes before the end of the game. Positively premature compared to the previous week! Rhoys Wiggins, absent since that same game in September I mentioned previously, made his long awaited return. The left back replaced Scott Wagstaff, not what we expected. Two minutes later Palace were level.

The home side had chance after chance but were getting closer to an equalizer by the minute. Murray, in a clear yard or two of space, picked the ball up close to the penalty spot and a striker of that calibre just doesn't miss, with or without Leon Cort lunging at him. Marking him may have been more effective.

The Palace pressure continued immediately, Ben Hamer producing a fine stop when the ball came hurtling in from a very sweet thirty yard strike. The resulting corner led up to a goal to really break Charlton hearts. Murray controlled a long ball into the box (directly returning from a hopeful 'anywhere will do' clearance) with the outside of his right foot at knee height, bringing it down for a sublime strike with his left peg without breaking stride. Hurt as it may, there is no doubting the excellence of the finish.

A double change with Kermorgant and Haynes both trying to rescue something as Powell went for out and out attack/panic had little impact for the last ten minutes, Palace still doing their damnedest to give Kevin Phillips a debut goal.

With emotions running high, Charlton fans both at the game and around the country were miserable and angry. Throwing a lead away against Wednesday was one thing, throwing it away against South London rivals another. There are plenty of us that will have to face Palace supporters at work tomorrow, bragging rights aside, I think right now I'd rather be Peter Odemwingie facing a hostile return to training than meeting the two Palace regulars I endure on a Monday evening!

No matter how high the tension, how angry the reaction or how badly policed a football match may be, there is no excuse for mindless vandalism. If like minded supporters want to punch one another that's one thing, men fuelled on beer and emotion will always have this side to their character, but the need to take out your frustration on parked cars belonging to local residents is not only embarrassing but financially crippling for the injured party.

I live between a housing estate and the town centre pubs. Every Friday and Saturday night the local yobs and drunks shout and punch their way past our front door with absolutely no respect for any residents. I know I'm starting to sound like my parents rather than the anarchic punk rocker I used to be, but nigh on every Sunday i push the dents back out of the roof of our car after some hero has decided to walk across it. Over the past year there have been about four occasions where we have discovered the wing mirror hanging by it's wires. Believe me, it's a crushing feeling.

All in all it's best we forget this game moving onwards and hopefully upwards for the visit of Birmingham City next week. We may feel despondent at the moment but let's not forget that for the first half yesterday we played a top six side off the park. As Chris Powell said, “It’s tough to take because it’s quite easy to forget about how well we played in that first 60 minutes. It was a proper local derby and chances at both at both ends and its just a body blow for us that we didn’t come out on top.”

We have the ability, we just need to be a little more professional. With our finishing, our substitutions and our exiting a football ground.

Posted by algordon_cafc at 6:15 PM