I can see for miles and miles 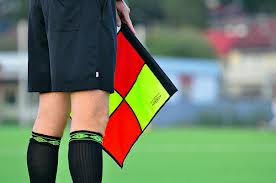 You'll notice the linesman today in front of the west stand didn't drop his flag once. Not only eagle eyes, he must have had gripping hands too.

Charlton today were undone by a much better footballing side led, at it's heart, by former Addick Andy Reid. The fact Yann Kermorgant got sent off didn't really change the outcome (albeit the event happening at 0-0), it just ruined the match as a spectacle.

Another former Addick, Greg Halford had a little 'ding-dong' with the French striker and it transpires our man kicked out therefore opening himself up to punishment. In my last post I commended Kermorgant on his professionalism, typical huh? Today he was riled and rash, much to his cost. Now if the referee, who had a good view, or for that matter the linesman on the same wing as the incident had decided a red card was in order then I believe we would have all accepted the decision. Kermorgant was pushed, he lashed out. He knew he was in trouble as he tried to explain to the linesman how he'd got himself into this predicament. After the initial incident the Forest players surrounded our frontman lashing out with their handbags, our lads came to Kermorgant's defense brandishing handbags of their own, bingo cards in the other hand. It really was a little like that, a lot of playground name calling and nothing sinister. From nowhere the other linesman, further away than yourself dear reader, proved to all and sundry why he will never blame the cheese sandwiches when he gets on a roller coaster. Through his binoculars he apparently clearly saw every detail and ran almost the width of the pitch to share the news. Oh how I wished he'd slipped up in the copious amount of mud on the pitch and landed on his backside as he returned to where he should be.

This all happened about five minutes before the interval, Charlton had been outplayed during the first half but were hanging on, the game was still very much alive. Chris Powell to his credit, I believe, didn't make a rash decision and hung on with the same ten until half time before readdressing his tactics and making a change.

His options on the bench were surprisingly large. Haynes and Fuller were the obvious but we also had new loan signing Jonathan Chiedozie Obika. The tall striker is with us from Tottenham for the rest of the season and according to Wikipedia (yes, I know) he is named after the former Orient and Notts County wide man. Chiedozie was a real favourite of mine and I really hope this is true. Powell plumped for Fuller in place of the ineffectual Stephens, to be honest he could have made any change and we still wouldn't have been at the races. Charlton would have had fared better in a sandcastle building competition on the awful pitch.

Forest, wearing the funkiest socks ever to grace The Valley (spirals), were a class above and should have battered us scoring a lot more than the two they did. I didn't catch the build up to the first so I cannot comment on Scott Wagstaff's contribution but their second was a tad fortunate. Dorian Dervite was the victim in a tough challenge warranting the referee to blow up, but the official let play continue only for Ben Hamer to fumble a shot allowing Forest to capitalize on the error and turn in the loose ball. Hamer lay motionless face down on the floor, the game was well and truly over and he knew that his was a poor mistake. After that Forest had a spell of hammering our goal but failed to hit the target again, their possession was controlled (the fans cheered every completed pass) albeit with numerical advantage, but they really did run us ragged. Whenever Charlton play against ten men we find it an almost impossible challenge, yet when we are down on numbers the words hot knife and butter spring to mind.

Once again against Forest we looked out of our depth, if we still find ourselves playing at this level next season (and I believe we will) we need to address this home form and get over whatever mental block we've developed. You can't just blame a lack of finance or an atrocious playing field, there is something deeper. You don't get two chances at this level, we've rode our luck this season at times, we won't be so fortunate again.

And as for Forest? It would be a travesty if they didn't make the play-off's this season. Without doubt one of the best footballing sides we've faced, and besides, Andy Reid deserves another final crack at the big time. I'm glad the Charlton supporters gave him great applause today as he left the pitch, it was the one and only moment I want to remember from today.