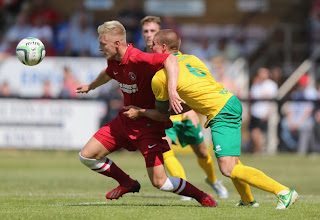 And so it's begun. Charlton Athletic are not only back in training but are kicking footballs on a pitch in front of paying spectators. And doesn't it feel good!

The first team have now had three matches, the traditional opener at Welling United followed by a now nearly traditional trip to Spain where they've faced a Gibraltar XI and Scottish Premier League side St Mirren.

At Welling a healthy crowd saw a five goal show from the visitors with young Joe Pigott bagging a hat trick and causing a minor storm on twitter with the #feedthepig hashtag.

A two-nil victory at Gibraltar's national stadium followed by this morning by a four-nil convincing victory over The Buddies to take our non competitive tally to eleven goals scored, none conceded. Great reading I'm sure you'll agree but I'm still concerned, we've lost Wright-Phillips, Haynes and Fuller yet haven't appeared to do anything about filling that void. Does Chris Powell have a cunning plan to unleash upon returning to our shores?

Haynes has gone to Notts County, young Waggy has gone to Bristol City, everybody seems to be moving in the transfer market except for us. We've signed Mark Gower and brought defender Richard Wood in on trial. I thought we were keen to sign Jonathan Obika permanently, and if that was the case wouldn't that have been one of the quick deals so he could have gone on the gaffers Spanish bonding session?

Don't get me wrong, I don't want to see us sign players for the sake of it, and as I discussed last night with a good friend over a pint of London Pride or two, I'd much rather see youngsters given a chance ahead of loan signings that don't share the club's passion, but isn't Yann Kermorgant our only striker of note at the moment? Pigott, Cook, Smith, Azeez, all strikers on the books but not a Championship first teamer amongst them yet, and love big Yann as I do, he's not a twenty goal a season striker is he.

If a neutral looked at our first three scorelines they'd never ponder such a situation, let alone worry where the goals will come from. We've been blessed of late with midfielders and defenders getting themselves on the score sheet, but if we're going to build on last season we need match winners. Despite Haynes' fitness and Fuller's age, they were for all intents and purposes match winners, they had a bit of class about them and a real presence on the football field.

We shall see, Powell knows his job (and his resources) far better than I do, but surely there's got to be an announcement or two soon hasn't there? We're in grave danger of being left behind. While we're at it, another midfield general and a centre half would be nice but I'll settle for just a striker right now. I keep thinking I've just forgotten someone, this tropical summer heat getting to my head but I've checked the first team squad list to quash this paranoia and sure enough we look as light as I feared.

Perhaps a new front man will arrive in SE7 at the same time as the new kit. Many would assume that if you've picked a design straight out of a catalogue the suppliers would have it on your doorstep very sharpish. And then you remember we're Charlton, not really on Nike's 'A' list of clientele so we can quite happily sell replica's to the supporters and keep the coins entering the sportswear giants pockets but they in return can't quite manage to kit the players out? Well done Nike, your nonchalant sentiment never fails to make me smile, keep it up. Perhaps they are waiting to officially release it at the much anticipated 'club day' on the 21st July. I do hope not.

And so to Wednesday evening, and my first visit to Kingstonian's ground for the friendly against AFC Wimbledon. I've only ever been to one of their fixtures before, a friendly away to Sutton United at Gander Green Lane which was coincidentally their first ever match. I'm quite excited, who knows there's even time between now and then that I could witness the arrival of a new player or even a new shirt.

Posted by algordon_cafc at 6:32 PM