After reading Marco's account of Saturday's game, i found myself reminiscing of times past and in particular some live music i used to enjoy as a teenager.
The reason for this was a picture of Humphrey Bogart on the blog, which i remember seeing in a wonderful little rock club in the centre of Cardiff twenty years ago. That club was named after our 'Umfrey, Bogiez. It's been knocked down since, but i'm glad to hear it's reopened in a new venue.

At the time we were still all enjoying that new wave of British heavy metal that so many of my friends grew up on. Remember bands like Tygers of Pan Tang, Saxon and of course Iron Maiden with the wonderful Paul Di'Anno?
April 16th were our local answer to this. A good traditional metal/rock band. Guitars, gruff vocals and plenty of denim and leather. As a young biker their music was heaven.

I knew two of the members really well. Chris Harris, guitarist, used to drink in our local, The Greyhound in Carshalton, whilst drummer John Fisher was also a biker and a member of the Christian Motorcyclists Association.

I always remember of their live sets, a big backdrop of the bands logo which looked like something done in a technical drawing lesson and at one concert at The Cartoon in Croydon, which used to be one the greatest music and biker bars in South London, a smoke machine which i accidently lent on during the lunchtime setting up. This resulted in us having to evacuate the pub for a short while waiting for the place to clear. 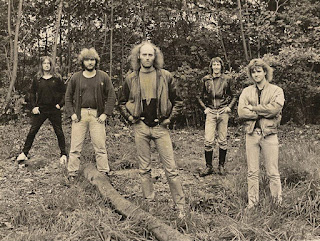 Other great venue's they regularly played were The Royal Standard at Walthmanstow and of course Bogiez in Wales.

Bogiez was an annual event and a proper 'jolly' in the true sense of the word. A coach would pick us up from a pub in Hackbridge, just round the corner from Chris Harris' house. By lunchtime we would be halfway to Wales and therefore pull off the M4 and find a pub. A midday skinful would then keep us going all the way to Cardiff where we would find a local pub or two.
I remember one year Wales had lost to England in the rugby that year and drunk Welshmen were everywhere, we even had to step over them on the pavements. Ordering beer in our cockney accents was a little unnerving!

Back at Bogiez, i recall a rather large chap in a white coat serving all kinds of greasy delicacies to a very hungry mob. This was downstairs along with plenty of pool tables. The bands played upstairs and never came on till late.

One year we took an old local gent from The Greyhound with us. Brian was a biker from old and allegedly brought the back patch club, Road Rats, into England from the USA. Rarely sober, we all kept an eye on him and late on in the evening we thought he'd wandered off. We needn't of panicked though. He was sitting at a table in a dark corner surrounded by young girls hanging on every word of his tales of biking and his time as a merchant seaman.

We would arrive back in Hackbridge around six on the Sunday morning and get on our bikes, which we left at the pub, and attempt to ride home in a straight line. Obviously i was young and stupid in those days and do not condone that kind of behaviour!

The band went on to record one album entitled Sleepwalking released on an independent label which, if memory serves, was French. I doubt i could ever replace that piece of vinyl these days, but have managed to find on line some mp3's of their songs.

They are of course, like many bands, long forgotten now but they will always remain special to me. I've lost touch with Chris and John, not to mention the friends i used to go with but this week listening to tracks like 'She's Mean' and 'Rattlesnake Shakedown', it's all come flooding back.

Posted by algordon_cafc at 1:08 PM