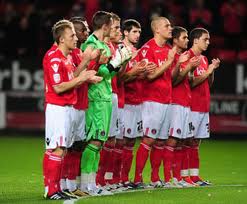 I wasn't sure if I'd write about this, and very nearly didn't. Until, that is, today when a turn of events convinced me to do it. The subject? Gary Speed MBE.

Now the dust has settled a little and everyone has had their say, i thought I'd have mine.
Firstly, my condolences to Louise and the family, their loss is everybody's loss. A true gentleman of the game gone forever.
I mentioned in my last post how the minutes applause before Monday nights game was the most important part of the evening on every scale and, to be truthful, i was going to leave it there.

Today at work in the staff canteen i overheard a conversation that really prompted me to say a little more though. Two 'colleagues' (the politest term i can think of) were having a right old moan about the former Welsh manager and all others who take their lives, not to mention those that battle with depression. Selfish, stupid, and pathetic were just some of the terms I'm prepared to type, believe me, there were far worse!
Everybody is entitled to their opinion granted, but sometimes keep it to yourself.

I heard a preach once at church about idol gossip and how someone is always on the receiving end of it, you just never know who's going to get hurt. These two may well have thought it was their private conversation, yet refused to keep their voices low and i was sat at the same table.
Now i know they would never have personally verbally abused me, but that's what they did without realizing. My first wife died in exactly the same way as Gary Speed, it will be ten years ago in January, and these two clowns inadvertently disrespected my late wife within my earshot.
If you've nothing good to say, say nothing. You can't insult or upset anyone then!

Yes time is a good healer, more so for the partner than the children. I have a new wonderful wife whom i love dearly, the memory and love of the first hasn't gone of course, she's not a replacement! It has helped make it a lot easier though, whereas children only have the one Mother and Father. I know the pain burns deep inside my late wife's children, they learn to live with it, that's as good as it gets.

At no time during our marriage would i ever have called her pathetic or selfish, if anything i was the selfish one in the relationship. I had bad days and felt down, don't we all? Hers were just a lot worse and she needed medication to keep going. Not really that much different to a diabetic really.

The Speed's do of course have the press to contend with and i pray they are left alone to mourn in private. We only had the local paper, although it did make the front page! That was our fifteen minutes of fame used up. I laugh now, i didn't when everyone at work had a copy.

RIP
Posted by algordon_cafc at 5:28 PM