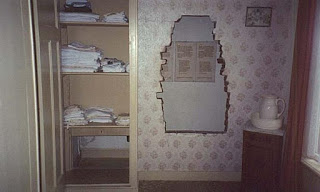 Yesterday i watched a film that i doubt many people have even heard of, yet alone watched. The Hiding Place is a film of the book by the same name written by Corrie ten Boom made in 1973, two years after the book.

For those who don't know, Corrie ten Boom was a daughter of a Dutch watchmaker in Haarlem. She along with her whole family were Christians and during the nazi occupation of their country, not only helped Jews escape the Netherlands but also took them into their home hiding them behind a false wall in her bedroom.

The family home was above the shop which is still exists, exactly the same today as it was seventy years ago and is now a museum, you really can go there and hide behind the wall!  For two years they harboured Jews, believing them to be God's chosen people.  "In this household, God's people are always welcome." Corrie once stated.
In February 1944 they were arrested by the nazi's with the help of a Dutch informant. The family were sent to a prison at Scheveningen, (where Corrie's father would die after only ten days) before being separated and sent to camps all over Germany.

Corrie and her sister, Betsie, were sent to a female nazi concentration camp in northern Germany, Ravensbruck. On entrance to the camp they managed to smuggle in a small bible and gave bible studies and readings in their flea ridden bunks to some of the other women.

With a real interest in the second world war, and a relatively recent visitor to Auschwitz, this story really hit a nerve. There are so many sad stories from these horrific times, it was very encouraging to watch a story that gave so much hope, albeit done on a very small budget!

Although, Betsie died in the camp, Corrie was set free at the end of December 1944 just as her sister had predicted. It was a clerical error that resulted in her release and just one week later, women of her age in the camp were put to death as they were deemed too old to be productive workers. 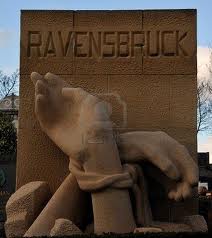 For most of her years after the war, Corrie helped holocaust survivors. She returned to her native Holland and set up rehabilitation centres to help former prisoners get back on their feet and deal with the mental traumas the camps left them with. This help and these centres obviously kept Jesus at the centre.

Corrie went on to travel the world as a public speaker and wrote in the region of twenty five books on her experiences and her faith.
She died on April 15th 1983 aged 91. This was, coincidentally, her birthday and in Jewish tradition, it's only the very blessed who actually die on their birthday!

There are many films covering the nazi's and their death camps, many of which are sadly compelling viewing, but none which carry the good news of Jesus throughout.
It's relatively easy for me to have faith in God living in the modern western world where I'm in very little danger of persecution for sharing my thoughts. It is a very different story in many other parts of the world even today.

Corrie ten Boom, and her whole family, showed great faith during some very difficult times yet never once thought God wasn't with them or had forgotten them.
Even though I walk through the valley of the shadow of death, I will fear no evil, for you are with me; your rod and your staff, they comfort me. Psalm 23, verse 4.

In my own bizarre way, i like to visit some of these historic places so as to get my own picture of how it may have been. Haarlem and a certain watchmakers shop has become high up on my list of places to go now!
Posted by algordon_cafc at 7:04 PM