Shocks in all the right places 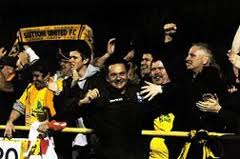 As is always the way with these earlier rounds, i hate the term 'proper', of the FA cup sponsored by that dreadful American (with German roots) lager, there were plenty of shocks and more than a headline or two to embarrass the professional players in today's papers.

I was fortunate enough to see two games from the first round, one in person and one on the TV, both of which had favourable results and both turned out to be good games of cup football.

Gander Green Lane, Sutton, was first on the agenda Saturday afternoon. The U's are enjoying a fantastic first season back in the conference south (or bet square or whatever) and although they went into the game against Kettering Town from the conference premier division as underdogs, there were in fact only a handful of league places between the two sides.

It was lovely to see the ground looking so busy again, a crowd of over 1500 turned up. That's about twice the size of a regular Saturday down the lane.
I say 'again' as it brought back many a happy memory for me. I've seen that ground both empty and crammed full over the years, not to mention everything in between, and yesterday we had a wonderful atmosphere reminiscent of some great days in the clubs history.

I did most my growing up in Sutton and during my teenage years spent a lot more time at GGL than i did at Selhurst Park to watch the Addicks. It was a lot cheaper than league football which, for a YTS lad, was much kinder on the pocket.
I saw their first conference game against Telford, i was there for the big ones against Middlesborough and Coventry plus getting the coach to Norwich and the Boro replay. These were great times but i was also there for the Surrey senior cup matches in the rain midweek. I hardly missed a match in the late eightees. I was a big Sutton fan and i do feel sometimes that i don't get there anywhere near as much as i should, and perhaps I've in some way let the club down as we've drifted away from each other. There are however different seasons in our lives and Sutton United were definitely at the centre of that one of mine.

So this cup match was far too good an opportunity to miss. I took Heidi, my wife, as she had never witnessed non league football before. I doubt very much she'll be witnessing it again though. What i would call a buzzing atmosphere she would call intimidating, what i think of as a vital part of Saturday entertainment she's finds a chore.
She was most definitely in the minority as Sutton held their own against a physically strong Kettering side. The first period may have been a little slow but the crowd had value for money in the second forty five. On more than one occasion the poppies (most apt nickname of the weekend award) threatened the Sutton goal forcing Kevin Scriven to make a couple of first class saves.
Sutton aways looked threatening on the break however and got the goal we were hoping for with a tidy finish from Craig Watkins just after the hour. There could have been more for the hosts had the finishing had been a little better, but the boys in yellow were going to make us all sweat right up to the final whistle as Kettering continued to put the pressure on.
There were wonderful scenes of delight once the ref had blown for full time. This was a football match that meant so much to the fans and one in which the players showed bags of character. There wasn't the slightest chance that a certain friendly international afterwards was going to have anywhere near as much heart and soul as was on display here.

As M&S would say, FA cup success, priceless. And of course, with a good cup run,  it is all money in the bank.

Today saw my first love, Charlton, play (unlike Sutton) their first game in this years competition.
The ITV cameras rolled into Halifax hoping to see the conference north side take a major scalp, in the same way as Northwich Victoria did a couple of years ago, and give the baying mob of armchair supporters what they want.

Chris Powell's Charlton are a different side to that which fell before them and they left that particular version of the script at home.
Yes it was a tough game of football, it was never going to be anything else, but the addicks were professional about it and at no point looked nervous.

Matt Taylor's first goal for the club was a peach of a header before the interval and should have settled things down a little. Halifax were however unlucky not to go in level when they hit the top of bar just afterwards. This meant they were still feeling upbeat and came out for the second half looking very bright.
A couple more chances plus the introduction of a young lad, St Juste, on the left hand side and it was most definitely still game on.

With Euell and Hayes starting up front and neither looking like having the greatest of afternoons, it fell to skipper Johnnie Jackson to seal things for the Londoners. A neat little piece of footwork teamed with a low shot resulted in a deflation in the voices of the commentators. From that point on, you felt that ITV hated us more and more, almost like we'd gone back on some kind of unwritten agreement.
As Hollands and then Pritchard (after great work on the right from debutant Michael Smith) put away numbers three and four, the independent terrestrial channel of the year must have felt we were rubbing their noses in it. Shame.

I have tremendous amounts of respect for the supporters who got up at the crack of dawn to be there for a half twelve kick off, and also for the club laying on free transport. I'm proud of the players for a quality performance in front of all and sundry including those I'll see at work tomorrow, so i don't have to undergo a tirade of ribbing from smug armchair fans.
Andy Townsend however, and how i so wish he read this blog, i am neither proud of you or do i have respect for you. I speak for all of us addicks there I'm sure.

As for the second round draw, well for a moment i was getting a little worried. Balls 25, Charlton, and 26, Sutton, were both still in the hat and most had already been called. I could not imagine the two coming out together, not so much who to support but I imagined being in the covered end hearing the ones i love signing things about the ones i love. I may well have stayed away.

I need not have worried though. Sutton entertain Notts County once again, just as they did three years ago. This will be the third meeting between the two, and God willing, perhaps third time lucky. This could of course give ITV the opportunity to use some of that old Coventry footage again and bring their outside broadcast team to Surrey. I could yet get the chance to tell Mr Townsend of my feelings towards him.

Charlton got a much less glamourous tie at home to Carlisle. This is in all honesty the perfect tie from the clubs point of view, and may well set us up with a windfall third round gem in January. We shall see.

Next weekend it's back to league action and my first ever trip to Griffin Park. Excited doesn't even begin to describe it.
Come on you reds!

Posted by algordon_cafc at 5:11 PM