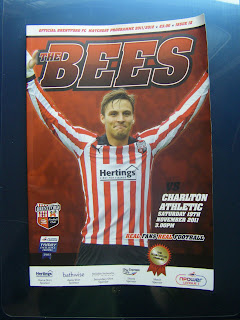 I'm in a small minority. No, not for the reason you're thinking of but for my 100% record at Griffin Park. Yes, yesterday was my first ever visit to the home of the Bees and I've proven to be a lucky charm.
It's a ground and a fixture I'd always meant to get to but it had never quite happened, so this season it was a high priority match when the fixtures were announced.

Normally with away matches i like to find a public house a little further from the ground than most, as waiting four deep at a bar doesn't really appeal. Although saying that, with a boozer on each corner of the ground, i doubt the crowds in TW8 are large enough for it to be four deep at every bar!

After telling a few younger Addicks off on the train for their language in front of non football going ladies, i jumped ship (more about ships later) at Kew Bridge. My drinking companions for the day were just south of the river at The Coach and Horses in Kew green. A lovely little Youngs pub, it guaranteed a wonderful couple of pints of 'ordinary bitter' in a comfortable surrounding (in stark contrast to a little later) prior to kick off.

It was only a short walk really to the ground from there and we dutifully lined up to get in with all the other last minute arrivals. I did feel sorry for the residents of number 79 Brook Road South, next door to the away entrance. Every matchday they must have a mighty fine collection of beer glasses, bottles and cans lined up on the garden wall as the stewards stop supporters entering with them.
I'm guessing their binmen must think of them as raging alcoholics!

Once inside, and i had parted with £2.60's worth (i don't hold grudges, but i hadn't realised we were playing at the motorway services) of sausage roll, we tried to find somewhere to stand to get a view of the game.
The terracing was packed and, as always, people congregated at the entrance making it feel a lot more uncomfortable inside than it actually is. I lost my companions almost immediately so found a hole suitable for one which, with my height, gave me as best a view as you're going to get in there.

The first half was pretty dire from a Charlton perspective. Brentford had more than enough opportunity to not only take the lead, but also to put the game out of reach. Rattling an upright was, however, as close as they came.
If a goal had materialised for them though, i have a feeling it may have fallen to ex Addick, big Miguel Llera. Especially with the amount of stick he was getting from a group of Charlton supporters around me. I like big Mig and wish him all the best for the future, i think Brentford is a club well suited to his ability and i think it helps show how far we have come that he wouldn't have a chance of dislodging Taylor or Morrison nowadays.

Speaking of Michael Morrison, one of my favourite moments came when he (and remember he's a centre half) dribbled through a handful of Brentford players as if he was Ricky Villa! It was at that moment that all resemblances with Eddie Youds stopped for me. i love Eddie but he could never have done that. Punch them yes, dribble a football around them, I'm afraid not.

I moved a little closer for the second half and found a group of slightly (read very) inebriated friends who had travelled to the game on the 'HMS Rose of Denmark disco boat'. 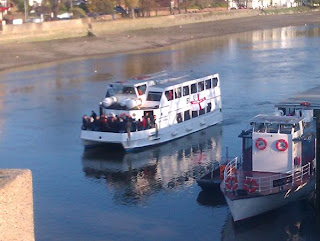 I caught glimpse of them crossing Kew bridge as they were getting ready to dock. The noise from the boat could be heard for some distance, the smell of the alcohol a lot further.

Again we seemed to make hard work of it again in the second half. Brentford continued to do what a home side should and have the more possession. Charlton did however look dangerous on the attack and twenty minutes into the second half took the lead. Danny Greens cross was met by Wright-Phillips and the prolific striker slotted home.
The away end erupted and we all thought that maybe this really was the the time the elusive win was going to come.

Charlton being Charlton made us sweat though. A nasty Brentford injury prior to the goal when the Brentford keeper collided with his own defender, resulted not only in the stretcher being used but a lengthy period of stoppage time. This incident combined with our skipper, Johnnie Jackson, going off with a hamstring injury (giving loanee Hogan Ephraim his first piece of Addicks action) meant 10 minutes were shown on the board by the fourth official!
I don't think i can ever recall ten minutes stoppage time, and with most of that occurring at the end we were defending, we were begging for the whistle. It was still a long time in coming as a kerfuffle in our penalty area that i could not see clearly enough to know what had happened, left us with what felt like an extra fifteen minutes being played. We were singing 'we want to go home' to the ref in desperation!

The whistle did finally get blown and the relief was there for all to see. A lovely moment came as Chris Powell held the Charlton players back to applaud the travelling support and all leave the field together.
Last season we never would have got that win, this team really is up for the challenge. I hope Jackson isn't out for too long. Last season he got injured and we fell apart. That won't happen this time as the strength in depth and the morale and the team spirit is too high, but a leader does have to be on the pitch. Being a hamstring though, you know full well he's obviously not going to be back next week.

After the match i headed back to Kew with a couple of great friends and we found another wonderful pub, The Greyhound. A few more pints of Youngs finest rounded off my stay in west London a treat.
From there i headed up west to meet my wife who had been on a girls day out in town with her sister. We met in Soho and then wandered into China town for dinner. An all you can eat buffet at The Hong Kong buffet was a delight as i scoffed my first solids since that sausage roll. Great food, well priced and very friendly staff. If only i had realised it was cash only i could have saved myself a dash around Leicester Square looking for a cash machine before they released the girls! They obviously didn't really hold them hostage...........

That is what great football away days are all about. It really doesn't get any better than that. I am however left with just one question. Back page of the Brentford programme has the squad listings for the teams as you would expect. Brentfords number 15 simply says Topcat?...........

Posted by algordon_cafc at 8:10 PM