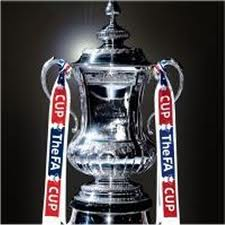 In hindsight, I'm glad we were beaten by Tottenham in the third round of the cup at White Hart Lane back in January. I don't really think i could have handled making it to the final and not being able to attend the Wembley spectacular in person.

Heidi's operation Friday went well and she has started her road to recovery. This of course means having me running around after her attending her every need. Doing that from north west London would have been an impossibility. I am therefore, the only Addick glad we aren't in this end of season showcase. Although it isn't really that this year. To me, it seems to be another example of the FA undermining this competition. Yes we're hosting the Champions League final at Wembley, why couldn't that have been fitted in around the annual events that take place at the stadium? Can you tell I'm not really a big fan of the UEFA competitions?
It also seems unfair to me to have left the possibility open for other Premier League events to overshadow the more and more out of favour competition. Stoke may not be there again for years, nothing should be able to take anything away from their day. Rant over.

Everyone has stories of childhood memories of cup finals, watching build up from mid morning right through to laps of honour, without taking that fixed stare off the box. For me Ipswich beating Arsenal has many fond memories of spending the day with my Grandad and getting excited together.

I've never had the chance to go to an FA cup final. I can only imagine it's like the play off final but with ten times more tacky merchandise and a much more international media interest and audience.
Good luck to Stoke, I'm rooting for them simply because they haven't been able to buy success. Having said that, prior to kick off, Manchester City haven't either. 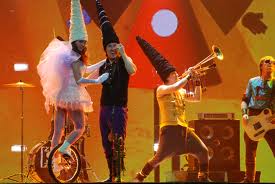 This evening is another final. One that i haven't missed in all the years i can remember. For me, the eurovision song contest is the opportunity to make a party out of a regular Saturday night. Score cards are drawn up, a few bottles of fine ale and wine are purchased, just to add to the atmosphere of course, then the laughter and cringing begins.

I'm not a fan of Blue, but it's the UK entry so they'll get some support from me. Unlike Jedward who i, along with the rest of the country, would love to see get nil points. The outfits, the songs, the side show theatricals are all part of it, although this year many countries are being a little more conservative. The likes of Lordi from Finland may never be seen again as more established artists and songwriters get involved.
This year we have countries like France and Switzerland for example with songs that wouldn't sound out of place on a national UK radio station.

We are guaranteed one real gem though. Moldova's song is called 'So Lucky' and that's how you'll feel after watching it. Big, and i mean big, hats, a girl on a unicycle, trumpets and a guitarist worthy of any punk band for energy alone are the highlights. It's upbeat for sure, but the trumpet parts definitely have slight undertones of a more traditional Moldovan sound, and i like that. New and old blended together in a way that surprises everybody. Europe's number one song competition is always a talking point whether you love it or hate it. This year will be no exception.

The only thing missing is Terry Wogan. His humour turned it from good viewing to great viewing for me but nevertheless, it's time to get the flags out that we'd put away after the wedding and cheer our nation again. And those wonderful underdogs that have brought tears of laughter to our eyes. As the Champions league will overshadow cup final, i won't let royal weddings etc overshadow Europe's premier music event.

Oh by the way, tonight Matthew, I'm going to be Moldovan. The way the political voting goes, they're a much safer bet.
Posted by algordon_cafc at 3:08 PM