Well done Swansea City on promotion to the Premier League. What a great game of football to bring the curtain down on the 2010/2011 season.
Thirty years on from John Toshack leading The Swans in the top flight with the likes of Bob Latchford and Leighton James in the ranks, we have a Welsh representative at the highest level of the domestic game.

I know we had a game of note at Wembley on Saturday, but the play offs are something we Charlton fans can appreciate a lot more. Messi might be the best now, but Mendonca scored a hat trick at the great stadium the Argentinian can only dream of. 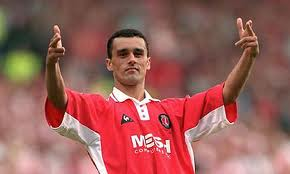 Reading started the game the brighter but on 20 minutes a clumsy penalty was given away. Scott Sinclair not only put that away, but doubled his tally just two minutes later. Stephen Dobbie made it three before the break and that was, we all thought, that.
Credit must go to Reading who really came back fighting. They pulled two back early into the second period and on the hour hit the post very nearly getting to the rebound. It wasn't to be though and Sinclair got his hat trick with another penalty deep in the second half.
Normally a 4-2 Wembley final would be credited as one of the best games ever seen, and good it certainly was. Charlton's victory over Sunderland in 98 however was never going to be matched. The drama wasn't of the same standard, and the free scoring strikers three goals not a patch on Super Clive's. Never has a match ball been so deserved to be taken home as on that glorious day thirteen years ago. That game is still the benchmark for all play off finals to this day.

One very nice touch was to see the Swansea players wearing t-shirts proudly remembering former team mate Besian Idrizaj. The young 22 year old player had died of a heart attack in May last year.
It was very moving to see the team collect the trophy with his face and name emblazoned across their chests.

The other play off finals took place at Old Trafford because of that European final. Today it took place where it should and 80,000 sold tickets meant a sold out stadium and another great atmosphere, not to mention advert for the domestic game at home.

In League One yesterday Peterborough booked a swift return to the Championship with three goals in seven minutes to brush past Huddersfield. If any League One player deserved to get promoted it was The Posh's Craig Mackail-Smith. Huddersfield will i feel, be a huge threat to us again next season.

League Two's final saw both the sides promoted from the Conference the season before. Stevenage had the better of Torquay to seal back to back promotions. What a way to start your Football League existence.

Add to that the Conference play off final with AFC Wimbledon, and once again you cannot argue over the special brand of excitement this system brings to our game. Yes it hurts for the side travelling home dejected, but that's football. It is, don't forget, only two months and it starts all over again.
Posted by algordon_cafc at 6:09 PM