A wonderful week in football!

Our season may have finished eleven days ago, but there have been many talking points in the world of football since. Most of which bringing a huge smile to my face. 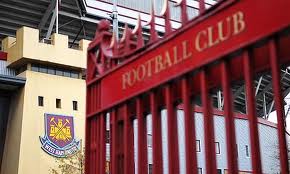 West Ham became the first club to be relegated from this season's Premier League. This was greeted in South East London with much laughter, joking and delight.
I don't have a real problem with the Hammers, and really do feel for former Charlton loanee, young Matty Fry who i think found relegation quite hard to come to terms with. Scotty Parker is another. Again not that popular with many Addicks, and i can fully see their point of view, but ex Charlton all the same. After a great season personally with an England recall and a football writers player of the year award, relegation as club captain must have hurt. England caps are rare for Championship players, so a summer move must be high up the midfielders agenda.
A stoppage time goal to bottom three rivals Wigan sealed their fate. Better than that was the light aircraft flypast with banner 'Avram Grant - Millwall Legend'. Pure genius. Proof that the spanners do have a sense of humour. Yes, i never thought i'd ever write that either! Grant himself was almost in tears in the post match interview, an hour later he was fired. It's all quite comical to the rest of us, but no-one could have called what would happen next.
The Grosvenor House Hotel in Park Lane hosted the West Ham end of season meal. £250 a head tickets were sold to loyal supporters who got to mix and 'thank' their teams efforts. Police however were called to disturbances after Demba Ba apparently refused to sign an autograph. He says he was racially abused by one supporter, we'll never know the full story. Suffice to say, you couldn't have written a better script and this is exactly the storyline you would expect from a group of EastEnders!


It's play off time again, joy and despair are once again emotions on view for the rest of us to relate to. There's nothing like winning a semi final and having the excitement of Wembley to look forward to.
I was lucky enough to be at Portman Road, Ipswich for the first leg in 1998. We had a wonderful day there and felt like the job was almost done after coming away with a lead and an away goal. After the second leg, i remember losing my shirt and dancing in Delafield Road. I even ran into one residents house to shake the hands of everybody sat in the lounge watching TV. They welcomed me like i was one of the family. These are just a couple of many great memories from a really happy time.
Swansea and Reading fans must be enjoying something similar now. The buzz of securing tickets, a new tacky scarf and car window sticker, it's all part of the razzmatazz surrounding the event.
Who remembers the East stand being opened to watch a Charlton vets versus Charlton youth match which was put on free of charge to those of us who had stood in line all morning to get our hands on Wembley tickets?

After 0-0 draws all round, Cardiff fell apart once again to gift Reading a Wembley showdown. Swansea however had a much harder battle. Two nil up against Forest, old nemesis Robert Earnshaw came on to pull one back. The ex Cardiff striker helped to create an electric finish to the match as the woodwork denied the reds. Swansea however finished the job from the halfway line when they broke from defending a corner leaving the Forest keeper stranded in the oppositions penalty box. Cracking stuff. This is what football is all about. Moments like that stay embossed in our heads for years giving great stories to pass down to future supporters. I really felt for those Forest fans last night, we were there ourselves twelve months ago. But i shared the joy of Swansea. It's a long time since John Toshack took them to the top flight. So long ago, Bob Latchford played up front for them. I remember that but a whole generation of Swansea supporters don't. They re going to have an absolute ball in the lead up to the final and i hope they soak up every minute of it. 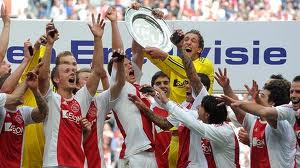 The funniest of all the weeks football events though is what happened to the Ajax goalkeeper, Maarten Stekelenburg. After winning the Dutch league, the Eredivisie, the team did the good old bus tour of Amsterdam. Now you would have to agree that the goalkeeper of the champions should really have the safest hands in the country. That may not be the case here though as he proceeded to drop the large plate. Please note that this isn't the same trophy as the one presented to the womens singles champion at Wimbledon every summer. Watching it fall from the top of a large bus is funny enough. Seeing it bounce as it hits the tarmac is priceless.
Watch for yourself!

Posted by algordon_cafc at 7:44 PM