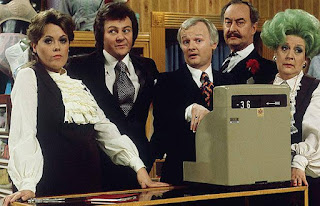 Now i don't for one second presume i could do anything any better than those at the helm, for running a football club has got to be difficult and you're never going to keep everyone happy all the time.
Running a household is enough of a challenge financially for me, while keeping one person happy every once in a while is seen as a success.

The boardroom at The Valley sounds ferocious and the club as a whole doesn't appear the happiest place to work recently. If rumours are to be believed, Rick Everitt the club development officer could soon be visiting the labour exchange. An outspoken Charlton stalwart, Rick would be another link with our recent history that would be lost to the club, another voice saying what it really means to 'be Charlton' that would fall silent.
In real life Charlton behind the scenes could be much healthier than we know, but being kept in the dark supporters will always fear the worst.

One part of the clubs operations we do know something about is the club shop, sorry superstore. Didn't Tesco copyright that term?

With all the excitement and ultimately disappointment of Friday you would have been forgiven for missing the news of the refurbished and refitted store reopening.
Charlton fan and radio disc jockey, Dave Berry gave up some of his birthday to cut the ribbon and open the doors to the public.

I've mentioned my dislike of the Nike brand before, the financial rewards for the club aside, they will always be an American basketball brand to me famed for their sweatshops.
The club shop is now a 'Charlton Athletic Nike store', i pray we don't go the route of Bolton and Reebok although in retrospect Reebok did hail from that part of the world.

We already know the season highlights DVD was only available from the commercial centre and back issues of matchday programmes are no longer in the store. We also knew Nike were bringing in, all but for a couple of leading faces, their own staff, what we have since discovered though is the addition of the Nike boot room and the Nike casual range in this first wave of rebranding. The basketball floor i expect will come later.
A standard 'Just Do It' slogan t-shirt is already available if you can't find it on the shelf of your local JD sports.

Someone told me the other day that when Dr Martens sponsored Rushden & Diamonds, the famous air cushioned soles were available from the club shop. I still think we should be sponsored by a brewery!

It's the modern football world, club shops aren't portacabins anymore but are big business ventures. To compete on a level playing field clubs can't afford to be one step behind the rest.
It doesn't matter how much heritage you have if you can't pay the bills, look at Portsmouth still living day to day.

No doubt nearer Christmas a young family members wish of a replica shirt will force me to give Nike some of my pennies although I'll be buying on line. I don't want to have to carry matching running spikes, basketball hoops, aftershave and golf bag home on the train with me.
Posted by algordon_cafc at 7:01 PM