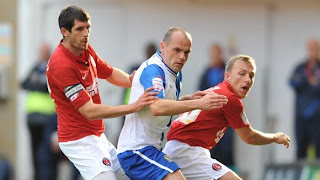 Having had to work during the Hull match, yesterday saw my first Saturday 3 o'clock kick off of the season - during the last weekend of September! I've heard many people claiming global warming has confused the seasons, i blame the likes of Sky slightly more.

As is so often the case, Charlton's opponents were making all the headlines prior to the game. How often has an opposing manager lost his job prior to the game or the following day after a defeat in SE7?
Steve Kean, whom i believe is very popular in Bolton, resigned as Blackburn boss on the evening before the match. It had of course been on the cards for months but Kean politely waited until a fixture against the Addicks before announcing anything. This was guaranteed to get us an extra twenty seconds on the BBC's Football League Show.

It was a day to welcome some famous and infamous faces to The Valley. Former Addick and former European footballer of the year, Allan Simonsen was in attendance both to watch the game and meet the guys at Charlton Live for a radio interview.
Other visitors, Danny Murphy and Darren Deadman weren't invited to speak into the radio microphone. Murphy, a lovely upstanding gent, was on the receiving end of plenty of abuse from the home fans. Although harsh in content, it wasn't surprising. In a poll of least liked former players, Murphy would feature highly in many answers.
Deadman, the referee, is someone trying to carve a reputation for himself. Normally a little card happy, it would appear after yesterday that someone really needs to sit him down and explain the whole principle of playing the advantage. On at least three occasions he stopped play the second a foul was committed even though an advantage would have been more prosperous to the side.

Someone who didn't hang about for the game was Charlton striker Ricardo Fuller. Despite rumours floating around Charlton Life and the North stand about a drink driving incident, it transpires the player is suffering from some kind of virus and was sent home by the gaffer.
After the injury to Kermorgant this forced Chris Powell to change things once again with Danny Hollands returning to the starting line up in a five man midfield. Young Michael Smith offered some attacking back up on the bench.

Blackburn, a Premier League side last season don't forget, looked strong from the start and manager less or not were going to give us a stern test. We of course were on the back of our first away win and should have been high on confidence. Blackburn scored after fifteen minutes.

There was talk at half time as to this goal possibly being off side, i don't know I'm yet to see a TV replay but what is important is the manner in which Rovers got it. They passed the ball right through us, we opened up for them like a flower welcoming the approaches of a cocksure bee.

As betting slips were torn to shreds around the ground, many may have thought the floodgates would open. I for one didn't think we had it in us. At least we were winning in the vocal department. I can understand why Murphy feels so at home at Blackburn, their fans made just as much noise as he was used to at Fulham for sure! We sang truthfully when we told them of our forgetfulness about their attendance.

I always remember a particular 1-0 defeat when i think of Blackburn, my first Charlton Wembley trip in the Full Members Cup when i was a young sixteen year old. A great day out when you could stand at the twin towers, just ruined by the scoreline. I always thought the opportunity of seeing Charlton lift a trophy at Wembley had passed me by at the time. This was to be no repeat.

Charlton earned a penalty when Leon Cort (to show how old I'm getting, my failing eyesight thought it was Wright-Phillips)  was brought down in the box just ten minutes later. Jackson stepped up and was unlucky not to score as the keepers trailing leg kept the ball out. Before we'd had a chance to moan about chances lost the ball was nicely nestled in the back of the net. Hollands sent the ball back into the box where Jackson made contact and diverted it in. I've seen photos since of his celebration, this goal meant as much to him as it did to us. We erupted.

Danny Green, again impressive, hit the upright before half time whilst the full backs Solly and the always improving Lawrie Wilson both looked strong again. At half time i was feeling rather optimistic. A win could be on the cards.

As the game developed we came very close to taking the points. Leon Cort nearly put us in front early in the second half with the ball being apparently cleared of the line. We all thought it had crossed over, again though I've yet to see a replay.
Wright-Phillips nearly sealed it for us in a way Ben Hamer could only dream of. A wonderful over-head kick was tipped over the bar with just minutes remaining.

We settled for a hard earned point, we deserved nothing less. It wasn't all plain sailing though. Johnnie Jackson limped off in the early stages of the second period with a hamstring problem. Adding to Wiggins and Kermorgant on the treatment table, this deepens Powell's injury woes but does open the door of opportunity to those willing to take it. Pritchard looked fresh when he came on for the skipper. Having lost his place recently he wants to be razor sharp during this second chance.

My biggest bug bear of the day was the long ball tactic. At times against opposition of this caliber, we don't look comfortable on the ball resulting in us either struggling with a first touch, playing the thing far too quickly or pumping it forward over head height. With just four foot nothing Wright-Phillips up front you can soon see the flaw in this. Michael Smith can hold the ball up well, maybe a chance for the youngster wouldn't be a bad move when employing this tactic?

All in all though a gritty performance that showed the character needed to survive and compete at this level. Our injury depleted League One side more than held their own against Premier league wannabes.

Off the field of play now and into the stands. After my Blues Brothers escapade last weekend and the discovery of my long forgotten hat collection, i graced SE7 wearing a brown trilby number. The remarks from friends and associates were mostly positive so I've decided it will appear more and more frequently.
I always remember a TV advert where the wife could tell her husbands whereabouts by which hat was missing. He had a football one, a fishing one etc. Well i now have a football hat. If you see it in the Rose or at a the ground feel free to come over and say hello.

Watford Tuesday, or as i prefer to call it, The Italian Job. A chance to add to our points tally before the much anticipated trip up to Blackpool.
I'm feeling very positive. Come on you reds! 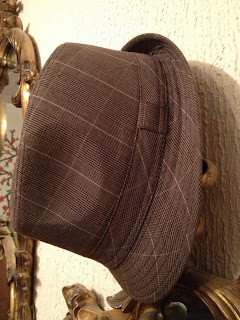 Posted by algordon_cafc at 7:34 PM