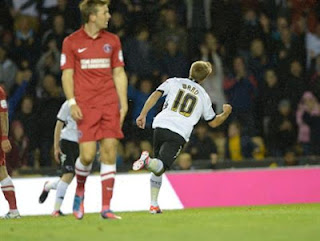 As hard as we try to find positives from these early season encounters, our shortcomings are becoming more and more obvious, with the inexperience and inadequacy to compete at this level seemingly rammed home (sorry) once again last night.

For the final twenty minutes Charlton threw everything they had at Derby, just as they had done against Forest and Palace before them, clawing the deficit back to only one goal, but the third defeat on the bounce was, I'm afraid, deserved.

The only changes to the starting line up were Danny Green coming in for Bradley Pritchard and Lawrie Wilson starting in place of the injured Rhoys Wiggins. Green fully warranted a start after looking so bright in his cameo last time out, whilst Wilson got the nod over the unlucky Cedric Evina for the full back berth.

We could be upbeat and commemorate upon the third occasion this season when the ball ended up in the back of the net yet a goal not given, or another late header which the opposition cleared off the line. We can even take some hope from being three goals down and still having enough fight in us to turn the finale into edge of the seat excitement.

None of this will hide the fact that for the majority of the game we looked absent. Again the opposition carved not just holes but huge slices out of our midfield, we still hoof the long ball forward optimistically and last night, unusually i must add, the defence was at sixes and sevens.
Alan Hansen would have gone into full meltdown summarizing the Rams second goal.

This is the same squad, give or take, that made a habit out of winning games last season and confidence will always play it's part, however i believe some of the mistakes were still made occasionally last year. In the Championship as opposed to League One you get punished more often, as we are learning to our cost.

The fight and resolve we're finishing matches with shows we've the ability to compete amongst this company and it is as we know still early days - many people have mentioned Reading's poor start to last season as a comparison.
Chris Powell can't be afraid to drop a senior player who's finding it hard to adjust. Danny Green, a player many i know in the summer said would struggle at this level, has come in and looked fantastic scoring a gem and assisting in the second last night. How many other squad players will delight and surprise if given the chance?

I have the utmost faith in the boss to turn this around and pull us out of the bottom three. Other than Forest, none of the rest looked head and shoulders above us, just better adapted to the job in hand at this level.
It's far too early to be calling the trip to Ipswich a six pointer, even if we do both share a seat in the relegation zone, but an important encounter it certainly is. I know in my heart we're too good for a relegation dog fight, i still think a mid table finish is a more realistic prognosis, but league standings don't lie. We really need to move upwards as soon as possible before we get too rooted at the base.

Ipswich entertain Wolves tonight giving us the psychological edge of an extra day between games, although if they win they can jump to the top half of the table. As i said before, still early days.

Posted by algordon_cafc at 7:33 PM