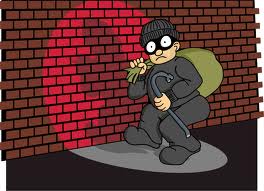 In forty years we've always been fortunate. Never once have we been burgled. You hear all these horrid stories from people who have had intruders in their house. The whole idea of a burglar is a nightmare, someone in your private space un-invited and having their grubby hands all over your possessions. What right do these toads have to take without asking the rewards of your hard earned?
So last night while Heidi and I lay in bed watching a film there was an almighty bang! I recognized it straight away as the front door. The bang was a very heavy (and loud) door knocker i had fitted that same afternoon.
First thing that sprung to mind, what can i quickly throw on to investigate. Why cant this happen while I'm dressed! So covered in dressing gown and Dangermouse slippers, i went gingerly onto the landing.
I'll add at this point that i live in a flat above the motorbike shop i work at. The front door is down a bleak looking passageway on a road with nothing but restaurants and take aways. Once inside the door you are faced with a staircase leading up to the flat.
Now it's not just the fact they're inside your house, it's the fact they could be armed with crowbar, knife, or who knows what this day and age. Not content with losing my telly, i could get a wallop thrown in as well.
So there i am speaking in a voice much louder than normal in the hope anyone within earshot will take that as a hint that i mean business. I know, I'll pray for them if i see someone, that'll scare them off! I made it to the top of the stairs and looked down. Door wide open but no-one in sight, so i ran down them and looked outside. Again, not a soul. Maybe they'd got up the stairs while i was still covering my modesty with the dressing gown. Back up and search the rooms. I burst into every one flicking the light switch as i went. We were ok. Whoever had been there had obviously not expected anyone to be in. The outside light had been on for our lodger who was working a late shift. Maybe they thought that light meant no-one was in. Who knows, main thing was, although the yale lock was damaged i could still shut the door and worry about it Sunday.
Shaken, we both went back to bed trying to ring our lodger to explain how to open the door. Would she pick up. No of course not. Heidi was concerned how we would sleep after this drama. She needn't have worried, five minutes later she was snoring like a good 'un.

After church today we went to B&Q. A new yale lock and an outside light with a movement sensor were purchased and then installed before the in-laws came round for Mothers Day.
I'm hoping Heidi doesn't even think about it tonight, and goes to bed without giving last nights events a second thought. We can put this behind us and put it down to experience.
It could have been so much worse, and i am so thankful something startled him and they ran off. Someone looking over us.
Sleep well.
Posted by algordon_cafc at 8:55 PM