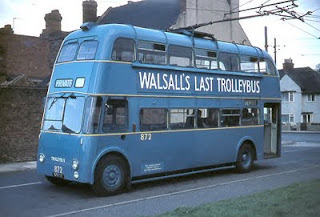 It was kind of ironic that a town famed for it's old trolleybus service, would be the destination of a coach load of Addicks in fancy dress. We took Sonic the hedgehog, a penguin, a Mexican and even Pamela Anderson who has certainly let herself go of late. Judging by the defending for Walsall's first goal, we even had someone dressed as a Charlton full back.

Only one change to our starting line up was a return for the birthday boy, Robbie Elliot, recalled to replace the loanee John Sullivan.
A bright start saw Paul Benson hit the woodwork after only four minutes. That along with his header that went just over the bar in the second half were to be our best two opportunities of the game.
Walsall, to give them credit, looked far more up for it as you would expect for a side fighting for League One survival. They did appear to be under the instruction of shoot on sight. Their first goal however was almost passed around the keeper after a nightmare in the Charlton rear guard. William Grigg slotted home to send the home fans wild. A real sense of belief was evident in their play after that and the experienced Jon Macken up front was proving a real handful, as was Matthew Richards in the middle.
The second and final blow came from a certain Julian Gray. Yes another ex Palace player rubbing our nose in it. After a lot of stick from the travelling five hundred Addicks, he certainly let us know he'd scored!

So where does this leave the table? Well, we are now in 58th place in England. A lowly 14th in our division. Leyton Orient's defeat at home to Tranmere has killed off their hopes of a play off spot. Bournemouth and the franchise now guaranteed top six finishes. Results in the Championship confirm that Scunthorpe and Sheffield United will join Preston in division three with us next season. Once again Palace have survived. Unless of course the FA can find a way of stripping them of ten or so points for some reason or another.
Bristol Rovers look as good as down with their awful goal difference, to the delight of many from SE7. Plymouth have a game in hand but that's entertaining Southampton on Monday. So they are as good as down. Walsall and the Daggers have it all to play for next Saturday although there is an outside chance Notts County could get dragged in.
The top of League two hasn't changed. Still only Bury and Chesterfield that we know to be definite opponents come August.

So next Saturday is our final game of the season. Both ourselves and Hartlepool have nothing to play for and as a football match, will probably be very quickly forgotten. Unlike the pre match drink in the Rose of Denmark. Plenty of the Charlton twitterers are gathering for a few jars of London Pride. I for one, cant wait.
Posted by algordon_cafc at 5:18 PM